But don't let poor proof of concept and insecurity put you off... 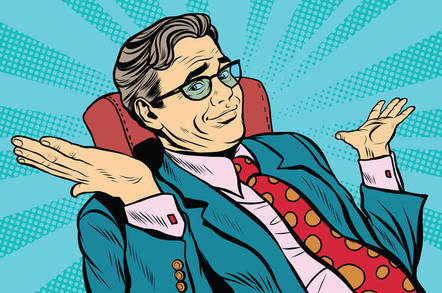 As many as three-quarters of IoT projects are a flop, according to Cisco. But rather than having fewer crappy connected devices, Switchzilla reckons what's needed is a better IoT architecture. If only someone could help...

Some 60 per cent of IoT projects stall at the proof of concept stage, with just 26 per cent going on to be be viewed as a complete success, according to a survey of 1,845 IT bods by the biz.

Speaking at Cisco's IoT World Forum in London, chief exec Chuck Robbins said part of the problem was a lack of interest from the top of companies, with leaders failing to "buy in" to IoT.

"We need to built IoT architecture that allows you to go beyond that 26 per cent," said Robbins.

"People are saying: I no longer want to be in the systems integration business, I need integrated stuff that just works. I need to get to the outcomes faster, I want to buy it as a service that is what is driving this."

By 2020 Cisco reckons there will 50 billion connected devices. "The threat landscape in this world is getting so much bigger," said Robbins - citing the example of the Mirai botnet and the WannaCry ransomware attack.

However, instead of connecting fewer devices to the 'net, Cisco unsurprisingly wants to flog companies its IoT Threat Defence product, launched today.

The product is intended to segment different devices on the network - such as medical equipment in a hospital - and prevent it from being attacked. He added: "We have to acknowledge threats will get in."

Gartner reckons by 2020, 75 per cent of biz with have three IoT projects, compared with 15 per cent, she said.

Robbins took the helm as chief exec from John Chambers in 2015. Since then he said the company has made 20 acquisitions bringing it total up to 195, including IoT business Jasper and AppDynamics for $1.4bn and $3.7bn respectively.

The company has been posting six quarters of revenue decline, with sales down 1 per cent to $11.9bn last week and announced 1,100 jobs are for the axe.

As such IoT and security are new markets it's keen to tap. ®