Astronaut reproduction could be possible one day, boffins reckon 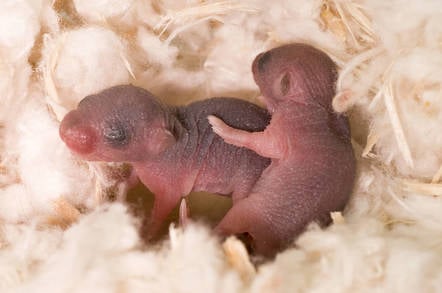 Japanese scientists say reproducing in space could be possible one day, after preserved mouse spermatozoa kept on the International Space Station resulted in healthy offspring.

“If humans ever start to live permanently in space, assisted reproductive technology using preserved spermatozoa will be important for producing offspring,” the researchers wrote in a paper published on Monday in the Proceedings of the National Academy of Sciences of the US.

The greatest hurdle to sexual reproduction is the bombardment of high energy particles in space. Radiation is more than 100 times more powerful on the ISS than on Earth, damaging DNA in cells.

Microgravity is less of a problem. Previous studies involving other animals such as sea urchins, fish, amphibians and birds have concluded that it doesn’t hamper reproduction. But performing the same kind of trials with mammals is trickier.

The experiment led by researchers at the University of Yamanashi, Japan, looked at the extent of radiation damage sustained in the sperm of 12 healthy mice by keeping the freeze-dried samples at -95°C (-139°F) for nine months.

The glass vials were launched to the ISS on August 4, 2013, and returned to the ground on May 19, 2014. When the spermatozoa are kept under frozen conditions they are dormant, but their reproductive capabilities can be rejuvenated after the samples are rehydrated with water.

They can then be injected in the egg cells of healthy female mice, where they developed into healthy “space pups” after 19 days of gestation.

A similar process could be “possible with human spermatozoa in the future,” the researchers claim. Particularly interesting is that the rodents’ sperm had accumulated damage compared to the control group that remained on Earth, but it is thought to have been repaired by the cytoplasm in the egg cell, and so the birth rate or well-being of the offspring was not affected.

All sorts of biological experiments have been performed on mammals as space agencies worldwide gear up for long-haul manned spaceflight missions. But they haven’t all ended positively. Last year, NASA-funded research showed that astronauts risk weakened spines and cognitive deterioration, on top of decreased bone density and nausea. ®

I couldn't give a Greek clock about your IoT fertility tracker

Something for the Weekend, Sir? Pop this in your mouth and say 'Rastapopoulos'

Wombats have all the fun

Big issues up for debate