Rubrik CEO: It's a passion project, not a hobby and not a 'job' 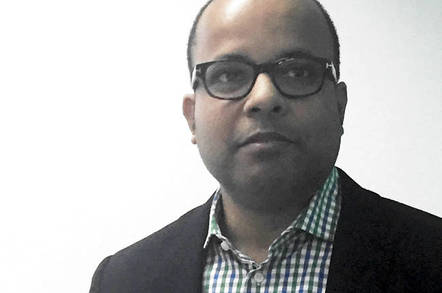 Profile How did Bipul Sinha, a man with neither entrepreneurial nor operation executive-level tech business experience, become the CEO of a startup?

In his teens Sinha learnt English in India, studied, gained an electrical engineering degree then emigrated to the USA as a software engineer. Later he left Oracle and gained an MBA, which led to venture capital investing.

In 2014, when he was in his late 30s, he stepped sideways from being an investment partner at venture capital company Lightspeed to co-found Rubrik. As three-year-old VC-backed startups go, Rubrik is doing a damn fine job so far, with a billion dollar-plus valuation and a $100 million run rate.

It's not made any obvious missteps that have sucked down other storage-related startups, such as Exanet, Violin Memory, sTEC, and many more. You would think you need CEO-level experience to avoid making the mistakes that doomed these companies, yet Sinha has none of that.

Is there something about being a VC which means that, when you do become a CEO of a VC-backed startup, you have a much firmer grasp on what the company needs to do and not do? Such as achieve a great exit; either by IPO or acquisition, or, as in Rubrik's case, to become an enduring institution that outlasts its founders.

The man is a bit of an enigma. Approachable but private, not wishing to talk about his background. What can we glean from his career so far?

Sinha also holds several patents in distributed computing, filed with others while he was at Oracle, plus some more during his time at Rubrik. One of the Oracle ones was co-invented with Dheeraj Pandey, who went on to co-found Nutanix for which Sinha, when at Blumberg Capital, became the first VC investor. In fact, Sinha says: "I actually hired Dheeraj into my team" at Oracle.

Nutanix co-founder Mohit Aron was also at Oracle and a co-inventor with Pandey on several patents. Aron is the founder and CEO of Cohesity. It's a small world.

It's tempting to twin Sinha with other immigrants from India who have or are running high-tech companies in the USA; George Kurian at NetApp, Dheeraj Pandey at Nutanix, Jaspreet Singh at Druva, and Tarun Thakur at Datos IO. They could form a high-tech Indian ex-pat CEO's club.

They spring out of the Indian sub-continent with ambition, intelligence, a huge belief in the value of education, and a great capacity for hard work.

It's tempting also to see a similarity with Israeli CEOs who have been educated in Israel and then travelled to the USA to gain the corporate and engineering experience they needed before starting companies; Moshe Yanai of XIV and Infinidat, Doron Kempel of Diligent and SimpliVity, and Dani Golan of Kaminario.

As venture capitalists, we advise entrepreneurs on what to watch out for, and remind them of certain tasks since they're busy building the companies. The job is sort of like being a doting father. You want to show your children all the options and then step back and let them take decisions. To my mind, this is the most interesting phase of the company. It is also when I am maximally involved. When the business takes off, I cut the apron strings and back off.

Only he decided that he didn't want to be a doting father – he wanted to be the startup CEO making the decisions – and so co-founded Rubrik in 2014.

It came about partially because he was interested in trying to find a use for cloud BLOB (Binary Large Object) stores as used in public clouds. He talked to Google and Facebook people and then had a realisation: a virtual machine was a effectively a BLOB, and you could back it up to the public cloud as exactly that, a BLOB. So back it up to a BLOB store and then use the data for other things like test and dev.

That was the lightbulb moment, the recognition that VM backup could be the killer app for using BLOB stores. "I pitched the idea to the other Rubrik founders and that's how it happened."

Lightspeed didn't want him to leave but he did anyway, and Lightspeed subsequently became a Rubrik investor. Who could be more qualified to obtain VC backing money than an ex-VC partner?

Sinha says: "It's the super early days of the journey to building a long-term company. We're less than 10 per cent done."

He also says that, for a CEO: "It's about whether someone has the right business call which is different from the right technology call."

At Rubrik he's not the technical/engineering visionary, the founder who often steps aside to take on a CTO role, giving way to a professional CEO, as Dr Kieran Harty did at Tintri, ceding the CEO-ship to Ken Klein.

We can't see him becoming a professional CEO either. What does the long-term future hold? He doesn't know but says it's not about ego.

So what is it about? He says he wants to build a great and enduring company, something that lasts longer than his lifetime. "It's a passion project, not a hobby and not a 'job'."

And in his case this really does seem more than the type of corporate platitude put out by startup CEOs eyeing a possible IPO.

Recently Rubrik took on a huge funding round, $180 million, with the company achieving a billion dollar-plus valuation – unicorn status – when it admitted it did not actually need the money, not having spent the cash from its previous round. Why the additional funding?

Sinha says the US economy has had six or seven years of growth and who knows when a downturn could happen. A company needs a balance sheet strong enough to withstand whatever shocks might come along. He also says that having the money now means that Rubrik can develop to its own timeline rather than being forced to follow someone else’s timeline.

Sinha is young, in his early 40s, and he and his co-founders could be on the cusp of building an enduring business. But I don't see him running it for ever. He is not like Commvault CEO Bob Hammer, who has been in CEO-level roles since 1982 and still vigorously running Commvault while past the age of 70.

My impression is that, assuming Rubrik becomes established, Sinha may become its chairman and then start another new chapter in his life Lord knows what, but it's not likely to include playing lots of golf and trips to Las Vegas casinos. He's a serious guy and has a long road ahead, even if he doesn't know where it's leading. ®

Whatever they're putting in Actifio's water, we'd like some too. Sheesh!

Data herding upstart stamps foot on the gas, bags another $100m in funding