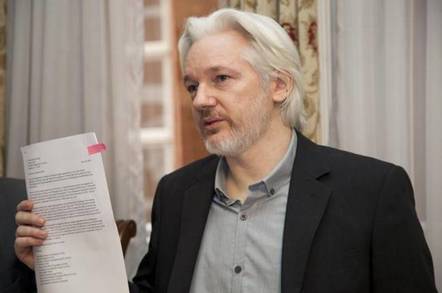 The vitamin D-deprived WikiLeaks founder tweeted a pic of himself to celebrate the news:

The pale WikiLeaks boss has been under self-imposed imprisonment at the Ecuadoran embassy in London since 2012 in order to avoid evade a European Arrest Warrant, believing he would be under threat of extradition to the US over his involvement in the disclosure of various secret cables.

He jumped bail when he holed up in the embassy half a decade ago, forcing his supporters to forfeit the £93,500 in bail money they had stumped up for him.

The Metropolitan police in London issued a statement confirming a warrant for the arrest of Assange still stands following his failure to surrender to the court on 29 June 2012.

It said: "Whilst Mr Assange was wanted on a European Arrest Warrant (EAW) for an extremely serious offence, the MPS response reflected the serious nature of that crime.

"Now that the situation has changed and the Swedish authorities have discontinued their investigation into that matter, Mr Assange remains wanted for a much less serious offence. The MPS will provide a level of resourcing which is proportionate to that offence. The MPS will not comment further on the operational plan."

In a brief statement, the Swedish Prosecution Authority said its director of public prosecution, Ms Marianne Ny, today decided to, for now, halt the investigation regarding suspected lesser-degree rape by Julian Assange. At a press conference today, Ny and chief prosecutor Ingrid Isgren will give more information about the decision. ®

Swedish prosecutors decided to pause the investigation because there is “no reason to believe” he will be surrendered to the country’s authorities in the foreseeable future.

According to Swedish law, a criminal investigation is to be conducted as quickly as possible. At the point when a prosecutor has exhausted the possibilities to continue a probe, the prosecutor is obliged to discontinue the investigation.

“At this point, all possibilities to conduct the investigation are exhausted,” said Sweden's Ny.

"In order to proceed with the case, Julian Assange would have to be formally notified of the criminal suspicions against him. We cannot expect to receive assistance from Ecuador regarding this. Therefore the investigation is discontinued.

“If he, at a later date, makes himself available, I will be able to decide to resume the investigation immediately."

She added: “In view of the fact that all prospects of pursuing the investigation under present circumstances are exhausted, it appears that it is no longer proportionate to maintain the arrest of Julian Assange in his absence. Consequently, there is no basis upon which to continue the investigation.”