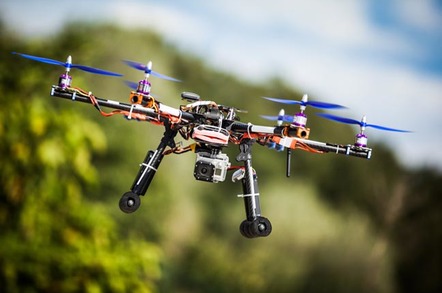 A US federal appeals court has struck down rules requiring recreational drones and other model aircraft to be registered with America's aviation watchdog, the FAA – but left in place airspace restrictions affecting drones in the Washington, DC area.

Attorney and recreational drone pilot John A. Taylor filed the legal challenge last year, claiming that the 2012 FAA Modernization and Reform Act, enacted to integrate remotely piloted aircraft into the national airspace, does not give the FAA authority to make rules affecting model aircraft such as recreational drones.

Model aircraft, under the FAA's definition, may be no more than 55 pounds and must be flown for as recreational purposes.

Taylor also took issue with Advisory Circular 91-57A, which the FAA put into place to limit where model aircraft can fly in the area around the nation's capital.

The Washington, DC Metropolitan Area Flight Restricted Zone covers 15 miles in all directions from the tower at Reagan National Airport, and includes Silver Spring, Maryland, where the Taylor resides.

In an opinion published on Friday, the US Court of Appeals for the DC Circuit on Friday agreed with Taylor that the FAA had overstepped its authority.

The court denied Taylor's petition seeking a review of the advisory flight restrictions because he failed to challenge it within 60 days, as required by law.

"The FAA's regulation was a blatant violation of the statute," Taylor said in an email to The Register. "It was disheartening to see a federal agency adopt something like that, and then maintain it. It's difficult to believe they did not realize what they were doing was unlawful. I was pleased to see the court stand up for the rule of law."

At CES 2017 in January, FAA chief Michael Huerta said that 670,000 drones and their owners had been registered since the FAA began accepting registrations in late 2015. He also said that he expects that by 2020, seven million drones will have been sold in the US.

Huerta suggested regulation is necessary to limit injury risks and security problems. "As drone flights over people become more and more commonplace, imagine the challenge of a local police officer at a parade trying to determine which drones are properly there to photograph the festivities – and which may be operated by individuals with more sinister purposes," he said.

The FAA isn't quite sure how it will respond.

"We are carefully reviewing the US Court of Appeals decision as it relates to drone registrations." the agency said in a statement. "The FAA put registration and operational regulations in place to ensure that drones are operated in a way that is safe and does not pose security and privacy threats. We are in the process of considering our options and response to the decision."

Asked whether the FAA intends to refund the more than $3m in registration fees it has presumably collected, the agency's spokesperson declined to comment. ®

FAA powers up an invisible hand, groping the skies for rule-busting biz drones