So you wanna build a robo-ride? Start saving up, get a ticket, get in line 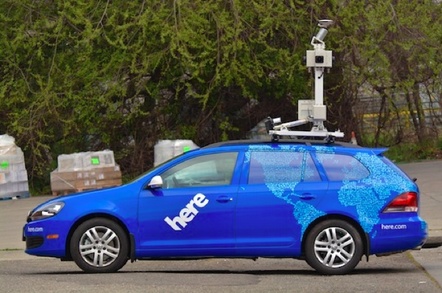 Analysis A closer look at LIDAR sensors – a key component in autonomous vehicles – reveals the lucrative and competitive nature of the self-driving car industry.

Essentially, if you want to enter this space, and take on the likes of Waymo and BMW and Ford, you'll need deep pockets – tens of thousands of dollars per test vehicle – and patience because you'll be waiting months for crucial components to arrive.

LIDAR, standing for light detection and ranging, uses infrared lasers to measure distance: while radar sends out radio waves and senses the returning signals to map out the world, a LIDAR fires out lasers and uses the reflections to behold reality.

The surrounding environment can be mapped in 3D using a combination of spinning LIDAR lasers. The rays sprayed from the system strike objects, people, buildings, walls, you name it, and reflect back into a sensor array. The time of flight – the period it takes for the beam to return – is measured for every pulse. By knowing the speed of light and the reflection time, the distance to the object can be rather accurately calculated.

LIDAR allows, for example, cars to continuously monitor its surroundings in real time, looking out for any changes so the vehicles' software can plan and drive safely. Below is a video showing a car feeling its way through a town using LIDAR:

This technology is often seen on a rack of gear or box of gizmos riding on top of self-driving vehicle: it is essential to the software controlling the car or truck, giving it a real-time detailed view of nearly everything that's happening on the road and the sidewalks. It also tends to be the most expensive part.

Velodyne, a LIDAR maker that Baidu and Ford together invested $150m in 2016, is an expert in this imaging hardware, and its products are in high demand from driverless vehicle developers. The biz was founded in 1983, and started out developing high-performance subwoofers. Today, it's based in California, just a little south east of Silicon Valley hub San Jose.

It wasn’t until 2005 that Velodyne cofounders David and Bruce Hall began developing LIDAR gear to compete in that year's DARPA Grand Challenge: a competition to build autonomous cars that could race across America's Mojave desert. At first their system was large and clunky, weighing 45kg, but over the next two years they managed to boost its performance and shrink the hardware down.

In 2007, the Hall brothers supplied LIDAR sensors to five out six finalists competing in that year's DARPA Grand Challenge to build robo-cars that can navigate urban streets rather than scream across America's southwestern dust lands.

Fast forward to 2016, and the demand for the sensors has skyrocketed due to the intense interest among researchers and tech upstarts in building driverless vehicles. Velodyne has since split into three divisions: Velodyne Acoustics, Velodyne LiDAR, and Velodyne Marine.

Beefier LIDAR sensors such as the HDL-32 and HDL-64 are able to see further out – to up to 120m depending on the model – and come equipped with 32 and 64 laser channels. These sensors are more likely to be employed in autonomous cars. For one thing, the range of a self-driving vehicle's sensors has to be at least 100 metres so that objects can be detected far enough out for decisions to be made and taken in time by the car's software.

But these top-end units aren't cheap. The cost from the Puck sensors to the HDL series suddenly shoots up. Wayne Seto, a product line manager at Velodyne LIDAR told The Register his company was not comfortable disclosing its current price list, instead insisting it will eventually bring down its prices by shipping in large volumes when – or if – self-driving car hardware sales really take off.

Oliver Cameron, CEO of Voyage, a startup aiming to make autonomous taxis affordable, told The Register you can expect to pay $85,000 (£65,000) for one of the top-of-the-range LIDAR boxes: “LIDAR is indeed expensive today. We pay $85k per unit for the Velodyne HDL-64Es.”

Velodyne told us its goal is to eventually whittle the price down to $250 per unit "for solid-state LIDAR sensor[s] when produced in mass volumes." Self-driving systems – whether they are part of a car or an add-on feature – are not going to enter the mainstream if they're more expensive than a house deposit, of course. A spokesperson for the Velodyne LiDAR team said there was "no specific date" to reach that sub-$300 price point. "But we’ll be able to lock down pricing once mass-production volumes are identified," she concluded.

In the meantime, demand grows and production is slow. The Reg has heard from sources, along with supply chain observers, that if you order a LIDAR system from Velodyne today, you can end up waiting up to half a year for the laser-ranging equipment to arrive in the mail. The manufacturer declined to comment on its backlog.

Since multiple LIDAR sensors, typically four, are needed for each test vehicle to ensure good coverage, self-driving startups without a sizable chunk of funding, and a production pipeline that withstand six-month delays, will find it tough to afford and acquire these sensors to compete with the likes of Waymo, Apple and Tesla.

Waymo, for instance, says it has managed to crush its LIDAR costs by 90 per cent. Other well-resourced teams are also working on their own cheaper variants. If you're starting out in self-driving car development today as an entrepreneur, it may be a tougher nut to crack than expected, beyond the obvious problem of how to create and train an AI motorist, due to the high costs and long wait times.

Some startups have managed to develop self-driving cars without LIDAR, Seto said. However, as companies move forward and require high levels of detail to train and operate their software in the real world, the laser tech “becomes pretty critical,” he said.

“As human beings we have a very good feel for distance," Seto added. "We don’t have the numbers like LIDAR, but we are pretty confident behind the wheel. But with a robot, the computer system doesn’t really understand anything. They need to have that measurement data to understand where everything is located in order to drive.”

To give you an idea of how hot this tech is, don't forget: Waymo and Uber are embroiled in a bitter legal spat over LIDAR development. In February, Waymo, the self-driving upstart spun out of Google, sued the ride-hailing giant for allegedly stealing its blueprints, and is demanding Uber be banned from using its LIDAR-based systems in its driverless car project. Uber tried to force the case into private arbitration, but a judge has ruled to keep the case in court. A jury trial in set for October. ®

As I was on the motorway, I saw a man who wasn't there. Then things went pear-shaped

Biz scaled back number of sensors from five to just one

Roundup Starsky Robotics shuts down, plus more news from world of neural networks