Realm opens up to Windows apps 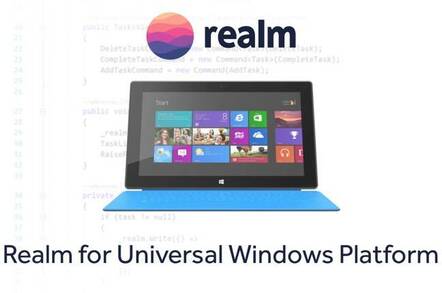 Realm, maker of an object-based database of the same name, is extending its mobile-oriented software to work with wares from a company not known for its mobile offerings, Microsoft.

"We really think the platform Microsoft is building is vibrant and has a lot of potential for growth," said chief marketing officer Paul Kopacki in a phone interview with The Register.

Realm has found favor with companies like Netflix, which use the NoSQL database for storing video metadata in its mobile app. It's often considered as a potential alternative to database technologies like Apple's CoreData, Couchbase Lite, and SQLite.

Kopacki said that while Microsoft missed the mobile boat, the Windows maker is trying to remain relevant and is making real progress with its cloud platform. "They're doing a very smart thing with UWP, playing to their strength," he said. "A lot of people are still using Windows software."

Kopacki likened Microsoft's situation in the mobile market to Apple's in 2001, when the Mac maker had been widely counted out of the desktop computer market. Microsoft isn't in such dire straits, he said, and he expects its efforts in the cloud and IoT markets will continue to strengthen the appeal of its platform for developers.

Convinced that it makes sense to become relevant to developers building apps for the 400 million or so devices running Windows 10, Realm is launching Realm for Universal Windows Platform. It's a new version of the Realm Mobile Database that makes Realm mobile databases usable with UWP apps. The Realm Mobile Database already has libraries that support Xamarin and Win32 (C#), Android (Java), iOS (Objective-C or Swift), and React Native/Node.js (JavaScript).

The Realm Mobile Database is designed used in conjunction with the Realm Object Server, which synchronizes Realm databases on devices. It runs on various cloud services including Azure.