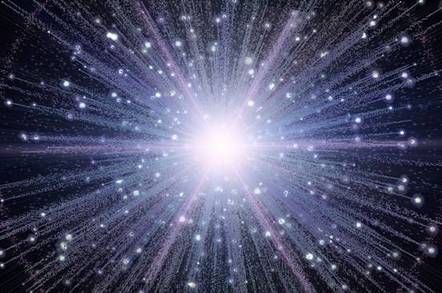 Not only is our universe is expanding, its expansion is accelerating. How and why this is happening remains one of the greatest unsolved mysteries in science.

This month, academics suggested it is caused by every point in space oscillating between expansion and contraction – and rather than these changes canceling each other out, there is a tiny net effect that causes the universe to gradually expand overall.

“Space-time is not as static as it appears, it’s constantly moving,” said Qingdi Wang, a PhD student at the University of British Columbia, Canada, who led a team looking into these tiny fluctuations.

"This happens at very tiny scales, billions and billions times smaller even than an electron."

Physicists reckon the universe's expansion is caused by dark energy pushing matter away. Although we don't know exactly what dark energy is, there is one top candidate: it's called vacuum energy, and it's said to be constantly altered by the fluctuation of virtual particles popping in and out of existence. It is a background energy found throughout the universe, and it's linked to Heisenberg's uncertainty principle in quantum mechanics.

If you apply the theory of quantum mechanics to this vacuum energy concept, it ends up having more energy than the total energy of all the particles in our reality: this would cause the place to explode. Clearly, we're all still here, unfortunately, so boffins must be missing something.

We're told Wang and co have calculated that vacuum energy can exist without blowing apart the universe, and have done so in a way that puts forward the idea that each point in space is yo-yoing between expansion and contraction, with a small net increase in the direction of expansion. Their work was published in Physical Review D on Friday.

William Unruh, co-author of their paper and a professor of physics and astronomy at the university, compared the effect to waves rippling through an ocean. The vacuum energy process is “similar to the waves we see on the ocean,” Unruh said. “They are not affected by the intense dance of the individual atoms that make up the water on which those waves ride.” The fluctuations happen at the Planck scale at 10-33 cm, so it's difficult to prove. But the researchers hope it may be tested indirectly in the future.

Wang explained to The Reg on Monday night: “Accelerated expansion is already a well-known observation of the universe with tons of experimental results. Our theory successfully explained this phenomenon. We are going to generalize the theory to being able to explain the evolution of the universe in more details, predict some new patterns which might be observed in future in the cosmic microwave background radiation."

Nobel prize winning astrophysicists Saul Perlmutter, Brian Schmidt, and Adam Reiss, discovered that the universe was enlarging at an increasing rate in 1998. The trio found that the redshift for observed supernovae was larger than expected. It suggested the exploding stars were moving away at a faster pace than previously believed and that the universe’s expansion had to be accelerating. Now we're a little closer to understanding how and why. ®

Simultaneously is and isn't bollocks

Big Blue will build 50-qubitter in 'next few years'