US Coast Guard: We're rather chuffed with our new Boeing spy drone 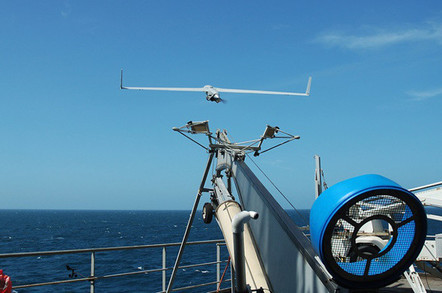 An Insitu Scaneagle is launch from a Royal Navy warship. Crown copyright

The US Coast Guard is well chuffed with its new Scaneagle drone – the same drone that the Royal Navy is ditching later this year, seemingly for lack of funds.

The coastal force, which, because of chronic manpower shortages, is lending engineering personnel to the RN for keeping frontline warships at sea, deployed the USCGC Stratton along with one Scaneagle on a six week patrol around California earlier this year.

“By the end of the deployment, the aircraft had directly assisted the STRATTON crew with conducting four interdictions, seizing more than 1,676 kilograms of illicit contraband valued at $55m and apprehending ten suspected drug traffickers,” said Insitu, makers of Scaneagle, as reported by British defence industry newswire Shephard News.

Insitu, makers of the Scaneagle, is a wholly owned subsidiary of Boeing. The contract for deployment of the single drone for one year is worth $4.5m.

Although Scaneagle had been bought by the RN for £30m back in 2013, the drone is set to leave British service late this year.

It was originally procured by the RN as an “urgent operational requirement”, which is defence-speak for “please, Mr Chancellor, stump up the cash for this thing we desperately need”. The good thing for the MoD is that UORs are not paid for out of the defence budget. The bad thing is that because they’re not paid for out of the defence budget, UOR kit is only ever temporary – unless the MoD decides to bring it “into core”, which means adding yet more spending to the already overstretched defence budget.

We have asked the MoD for comment and to confirm the out-of-service data for Scaneagle.

Although the RN seemed keen to keep Scaneagle in service, using it during the Unmanned Warrior roboat exercise last year, it appears that the aerial surveillance capability it brings will be replaced by the Lynx Wildcat helicopter – the same Wildcat whose crews must land to move vital tactical data around on USB sticks. ®