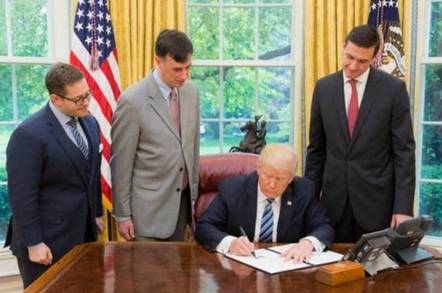 President Donald Trump has signed his long-promised executive order on cybersecurity – and it says the executive branch will take overall command of securing America's critical IT systems.

During his campaign, Trump promised a missive on cybersecurity within 90 days of taking office, but delayed the signing in late January. Now, 111 days after swearing to protect and uphold the constitution of the United States, the order has been signed, and it signals that Trump intends his staff to take command.

"The President will hold heads of executive departments and agencies (agency heads) accountable for managing cybersecurity risk to their enterprises," the order begins.

"In addition, because risk management decisions made by agency heads can affect the risk to the executive branch as a whole, and to national security, it is also the policy of the United States to manage cybersecurity risk as an executive branch enterprise."

All federal agencies (of which there are hundreds) will have to enforce the National Institute of Standards and Technology guidance document [PDF] and will report on their progress in the next 90 days.

The Secretary of Homeland Security and the Director of the Office of Management and Budget will then assess the reports and present the information to the President 60 days later. They will also produce a plan to protect the executive branch if there are holes in its security.

In addition, the Director of the American Technology Council will ask each agency for a feasibility plan for combining IT infrastructure for departments within 90 days. Agency heads will also, henceforth, give preference in IT spending to shared systems architecture.

The Secretary of Defense and the Director of National Intelligence aren't spared the report writing either. They will have 150 days to come up with a plan to protect national security IT systems and deliver it to the Assistant to the President for National Security Affairs.

But the US government can only do so much. Over 80 per cent of IT systems classified as part of the US critical infrastructure are in private hands. Trump wants the Secretary of Homeland Security, the Secretary of Defense, the Attorney General, the Director of National Intelligence, and the Director of the FBI (once he has decided who that will be) to report on strengthening these systems within 180 days.

Trump also wants a report, again within 90 days, on how to promote transparency in government security purchasing agreements. But the president also concentrated on specific threats.

There was no mention of encryption, or any plans to allow law enforcement to install backdoors. Nor were there any direct plans for action – at this stage it's reports only, please.

So basically: expect no movement on cybersecurity over the next three to six months. The players will have their hands full preparing the hundreds of reports the executive order demands, and will be far too busy to cope with anything else. ®

No, the FCC can't shut down TV stations just because Donald Trump is mad at the news