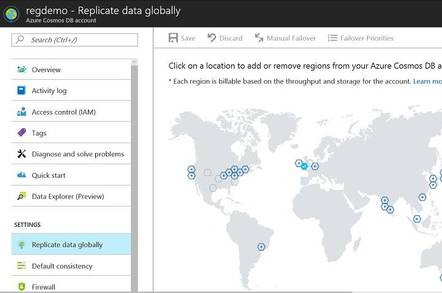 Microsoft calls Cosmos DB a "multi-model" database service because it lets you choose from several different APIs. These are DocumentDB, which uses SQL, MongoDB emulating a popular open-source NoSQL database manager and, new in this release, Gremlin for graph support and Table for key-value pairs. Cosmos DB is available now, though the new APIs are in preview.

Gremlin is the language of Apache TinkerPop, an open-source graph computing framework. You can use a Gremlin console with a Cosmos DB database.

A graph is a collection of vertices and edges, where vertices are entities such as people or places, and edges are connections between vertices. Graphs are useful for analyzing large datasets and make predictions based on similarity of connections. For example, you could use a graph database to drive a recommendation engine powered by a customer's previous purchases.

There is synergy between graph databases and data from IoT devices, which typically generate large amounts of data from which you extract value with analytics. You can connect Cosmos DB to Azure's HDInsight service, for processing large datasets.

Rimma Nehme, a database architect working on Cosmos DB, said: "We give you SLAs in four dimensions, latency, throughput, availability and consistency. When you query the database you will get a response in under 10 milliseconds 99 per cent of the time."

Data is stored as JSON (JavaScript Object Notation) objects, rather than binary objects, which are in Azure blob storage. Indexing is automatic. You can also use JavaScript stored procedures.

Cosmos DB supports scaling to two or more Azure regions. In this case, database calls are routed automatically to the closest region. Microsoft states that it uses Cosmos DB internally for Cosmos DB for its own projects including Windows Store and Xbox Live. Other use cases include mobile applications, games and web applications.

Microsoft has also announced new MySQL and PostgreSQL database services so that developers no longer need a third-party solution or virtual machines to use these database managers.

Cloud database services are highly competitive. Amazon Web Services has won customers with its Aurora distributed database system as well as other services. Microsoft's announcements are not enough to put the company ahead in this area but will help to close the gap.