Microsoft is on the edge: Windows, Office? Naah. Let's talk about cloud, AI

At its dev conference, Redmond is all about Azure, bots, Azure and also Azure 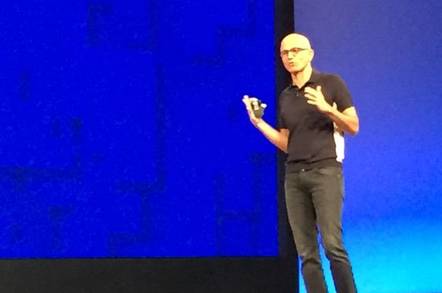 Instead he, along with Scott Guthrie, EVP of the Microsoft Cloud and Enterprise Group, and Harry Shum, EVP of Microsoft's Artificial Intelligence and Research group, spent most of their time on stage, in Seattle, talking about Azure cloud services, databases, and cross-platform development tools.

Arriving on stage to give his keynote address, Nadella in jest said that he thought it would be an awesome idea on such a sunny day "to bring everyone into a dark room to talk about cloud computing."

Office and Windows can wait.

Microsoft watchers may recall that its cloud-oriented businesses have been doing well enough to deserve the spotlight. In conjunction with the company's fiscal second quarter earnings report in January, the Windows and Office empire revealed that Azure revenue grew 93 per cent year-on-year.

During a pre-briefing for the press on Tuesday, Microsoft communications chief Frank Shaw described "a new worldview" for the company framed by the "Intelligent Edge" and the "Intelligent Cloud."

Nadella described this newborn weltanschauung as "a massive shift that is going to play out in the years to come."

He mused about a software-based personal assistant to illustrate his point. "Your personal digital assistant, by definition, will be available on all your devices," he said, to make the case that the centralized computing model, client and server, has become outmoded. Data and devices are dispersed.

In other words, all the data coming off connected devices requires both local and cloud computing resources. The revolution will not be centralized.

That could easily be taken as reheated Cisco frothing about the explosive growth of the Internet of Things and bringing processing smarts to the edge of the network. But Microsoft actually introduced a new service that fit its avowed vision.

Microsoft's bipolar worldview – the Intelligent Edge and the Intelligent Cloud – manifests itself in a novel "planet scale" database called Azure Cosmos DB. It's a distributed, multi-model database, based on the work of Microsoft Researcher Leslie Lamport, that promises to make data available locally, across Microsoft's 34 regions, while also maintaining a specified level of consistency across various instances of the data.

An Intelligent Meeting demonstration, featuring Cortana, showed how AI has the potential to exchange and coordinate data across multiple services. But "potential" requires developer work – it will take coding to create the Cortana Skills necessary to connect the dots and manage the sort of cross-application communication that knowledge workers accomplish today through application switching, copying, and pasting.

Beyond code, it will take data associated with people and devices in an organization to make those connections. That's something Microsoft – with its Azure Active Directory, its Graph, and LinkedIn – has in abundance.

A demonstration of real-time image recognition to oversee a construction worksite showed how a capability like image recognition might be useful to corporate customers. Cameras spotted unauthorized people and located requested equipment on-site. It looked like something companies might actually find useful.

Artificial intelligence as a general term sounds like naive science fiction. But as employed by Microsoft, it refers to machine learning frameworks, natural language processing, computer vision, image recognition or the like.

"We believe AI is about amplifying human ingenuity," said Shum.

Microsoft's concern is convincing developers and corporate clients to build and adopt AI-driven applications using Microsoft cloud computing resources, rather than taking their business to AWS or Google Cloud Platform.

One way Microsoft hopes to achieve that is by offering cloud computing outside the cloud, on endpoints like IoT devices. The company previewed a service called Azure IoT Edge to run containerized functions locally. It's a way of reducing latency and increasing responsiveness, which matters for customers like Sandvik.

The Swedish industrial automation biz has been testing Azure IoT Edge to anticipate equipment failure in its workplace machines, in order to shut them down before components break, causing damage and delays.

Next page: It wouldn't be a tech keynote without, yup, oodles of artificial intelligence
Page:
Tips and corrections
14 Comments