Spare your hypegasm, this is a research roadmap 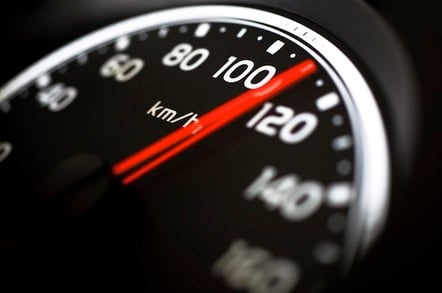 John Cioffi, known as the “father of DSL”, reckons we're nowhere near the limit of copper transmission speed, delivering a presentation claiming Terabit performance is feasible.

Feasible with a bunch of caveats, that is, the two most important of which are “if research delivers on theory”, and “if it can be standardised”.

The basis of Cioffi's proposal in this PDF presentation is that at high enough frequencies, signals in copper behave differently to at low frequencies.

At the kinds of frequencies we use for today's DSL, the signal is carried by the movement of electrons in the wires. If, however, the carrier frequency is high enough, the waves propagate in a “waveguide” mode – radio waves following the edge of the copper, rather than electrons oscillating inside it.

So far, so good: none of this is science fiction, and in fact, AT&T's fooling around with using wires as waveguides in its AirGig demonstration.

What's bound to raise eyebrows is the claim that a waveguide transmission mode would be sufficient to carry terabit signals in the copper links that today struggle with megabits.

If we understand what's on the presentation slide below, there are two tricks: the first, that the right configuration of insulated copper wires can create waveguides in which the signal interacts very little with the copper at all; and second, that in a cable bundle, there could be dozens of potential waveguides that create what's effectively a MIMO (multiple-in, multiple-out) matrix. 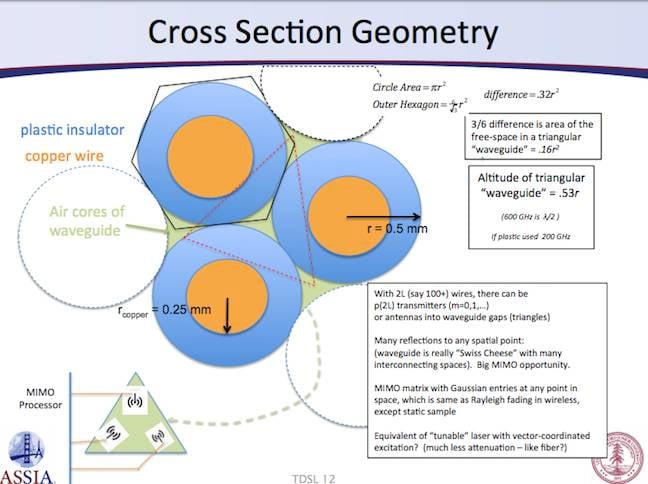 Enough of the red dotted triangles in a cable bundle, and you get 1 Tbps. Image from Assia slide deck

If – and the more slides of the presentation you read, the more “ifs” there are – the carrier frequency in those waveguides is 300 GHz, and if those channels can carry 4096 tones, and if you can encode 2.5 bits per tone – then you get to a Terabit system that Cioffi reckons can operate at 100 metres; 100 Gbps at 300 metres; and 10 Gbps at 500 metres.

Cioffi hopes other companies will work with his company, Assia, to at least work out what's feasible, even if it's not a terabit system.

In Australia, the company building the increasingly-copper National Broadband Network, e-mailed the local tech press to wax lyrical about the development.

“nbn is always pleased to hear about new technologies that could deliver better broadband faster and more cost effectively to Australians”, its statement said. “nbn has already successfully trialled both G.fast and XG.FAST – achieving 8Gbps over the latter – in order to assess how these technologies might be deployed over the NBN.

“However, our G.fast and XG.FAST testing was delivered over relatively short copper lengths so the potential arrival of a new technology that could extend ultra-fast speeds of 10Gbps to 100Gbps over longer copper lines is a very exciting development for the entire industry.”

If, we would add, it comes to fruition. ®