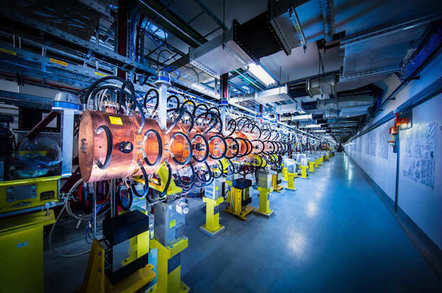 A 10-year construction project in CERN's Swiss/French mountain lair has come to an end – and a few years of testing and integration are about to begin.

The first step in the chain of particle acceleration that culminates in protons colliding to reveal secrets like the Higgs boson, the linear accelerator sends negatively charged hydrogen ions (hydrogen with an extra electron) through charged coils.

Once each 400 microsecond pulse of ions has enough energy – in the case of Linac 4, it will be 160 MeV (mega electron volts) – the electrons are stripped away, leaving the protons to enter the Proton Synchrotron Booster. Both the density and intensity of the particle beams are shaped by the linear accelerator.

CERN's announcement explains that there's to be a couple of years of tests ahead of a planned long shutdown in 2019/2020, when Linac 4 will be connected to the LHC.

When Linac 4 is active, CERN Director General, Fabiola Gianotti says it'll be the foundation for a High-Luminosity LHC which “will considerably increase the potential of the LHC experiments for discovering new physics and measuring the properties of the Higgs particle in more detail”.

Linac 4's contribution to luminosity comes from its higher energy – more than triple Linac 2's 50 MeV – and its use of hydrogen protons.

CERN reckons the high luminosity configuration will increase the LHC's data collection tenfold between 2025 and 2035. ®

Take a bite of some seriously big data