Phew! We had to order a new array to hold all of this week's Dell EMC announcements 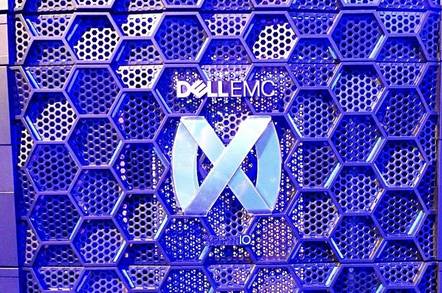 As the main revenue-earning engine of the $74bn run-rate Dell Technologies, Dell EMC is now the storage competitor to beat – and virtually every other supplier has products aimed at besting those delivered by Michael Dell's behemoth. So Micky's mob is shoveling out a raft of announcements to keep the pressure up.

Naturally there is a digital transformation marketing wrapper around all this stuff but, shorn of that, this is a set of traditional array hardware and software upgrades.

Newly embedded into Dell, the EMC part of the business has adopted the Dell SC array into its product line and introduced new versions of it alongside the EMC heritage arrays to retain its top storage dog status and fend off its myriad competitors.

OK, deep breath – there was an awful of lot of stuff announced on Monday, so here's our rapid summary with links to more info if you really need it:

With a claimed 6.7 million random read hit IOPS, and 350 microseconds response time, it is said to be 68 per cent faster and have a 30 per cent better response time than the VMAX 850F. Dell EMC claims it is up to 4x faster at OLTP with compression than the nearest, but unnamed, competitor.

This VMAX has more than six "nines" availability (99.9999 per cent) and Dell EMC suggests it's good for core banking, credit card processing, electronic billing or hospital record systems that "can never, ever go down."

Since seven-nines Infinidat (99.99999 per cent uptime) is claiming it's faster than VMAX, and offering a win-or-lose ten grand evaluation, VMAX customers can get set for some interesting performance comparisons.

This Dell EMC blog post says more about the 950F. The system can be ordered this month and will be generally available in June.

We're told more horsepower has been added to XtremIO's hardware, and the software has been updated. The X2 generation has three times the capacity of the previous XtremIO models, 80 per cent better response time, and an average 25 per cent improved storage efficiency. It can support 2x more copies per cluster for integrated copy data management (iCDM), we're told.

Compared to the previous XtremIO product, X2 provides 3x the capacity per X‑Brick and multi-dimensional scalability to scale up from 7TB to 138TB per X‑Brick, scaling out up to eight X‑Bricks.

Also X2's rack density has been increased 4x, providing up to 5.5PB effective capacity and a capacity density of over 100TB effective per rack unit. It has a price as low as one-third of its predecessor.

In contrast to VMAX, Dell EMC says the X2 "is the ideal platform for workloads that benefit from deduplication and ... iCDM for large-scale snapshots, such as VDI and development/test use cases."

The X2 generation is discussed in this official blog post. Check out tech specs here. XtremIO X2 can be ordered this month and will be generally available in the summer.

The four new all-flash Unity 350F, 450F, 550F and 650F models feature, it's claimed, up to 4x larger file system capacity at 256TB, and an 8x increase in density compared to the previous Unity generation. They have up to 500TB of effective storage capacity in an 80‑drive, 3U enclosure.

With new snap-in rails and better documentation, these Unities feature sub-10-minute deployment, which we're told is 33 per cent faster than before. Good to know.

A Unity blog post here should provide more info. But check out a data sheet here. Unity all-flash models can be ordered this month and will be available in July.

Compared to the previous SC4020, the new and re-engineered hybrid SC entry-to-mid-range block array has twice the capacity at 2PB, up to 45 per cent more IOPS, and 3x the bandwidth, with FC, iSCSI and direct-attach SAS connectivity. There is a new 3U enclosure with 30 drive bays and dual, of course, controllers.

Dell EMC claims it has the market's lowest hybrid array $/GB cost compared to other unnamed mid-range storage from major vendors. We assume this means HPE, IBM and NetApp. The comparison was done by Dell EMC using net effective capacity after 5:1 data reduction, and including five years of 7x24x4-hour on-site support as compared to other midrange storage from major vendors when using the same mix of SSD and HDD capacity. Your $/GB cost may vary, of course.

The SC5020 can be ordered this month and will be generally available in June. Dell EMC tell us this page will provide more detail.

There was no announcement about the PS arrays.

When compared with the existing Isilon HD400, the new Isilon design can, we're told, increase data center efficiency by up to 75 per cent, reducing data center power, cooling and space requirements.

There are all-Flash (F800), hybrid and archive configurations. Performance and capacity can be upgraded. The new systems run the OneFS operating system and can be deployed in existing Isilon clusters or in new ones.

Isilon F800 not yet fully unwrapped for Dell World exhibition

Dell EMC is pointing these Isilon arrays at what it calls demanding file applications across industries including media and entertainment, life sciences and financial services. Check out this webpage to find out more.

New Isilon platforms can be ordered this month and will be generally available in June.

An Intelligent Data Mobility 2.0 offering from Dell EMC Services provides a platform- and vendor-agnostic data migration methodology. It features standardized blueprints in three packages, with customers getting an engagement tailored, Dell EMC says, to their business and technology needs.

There are few more impressive sights in the industry than the Dell EMC product engine pumping out new kit for its annual show-and-tell customer and partner bonanza. Here's what is basically EMC still doing its thing, with Dell's SC taken on-board and playing its part too.

We wait to see how Dell EMC will respond to Infinidat competition at the VMAX level, the pushing from Pure and NVMe in the XtremIO/Unity area and the Unity trademark case loss against Nexsan.

But for Dell EMC customers, the first realization is that EMC hasn't changed inside Dell. It's an aggressive product development and marketing machine set on crushing its competition.