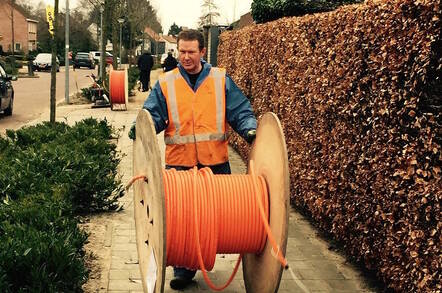 Virgin Media added an extra 102,000 UK customers to its super-duper Project Lightning broadband programme in the last quarter - the same programme it was forced to admit having overstated by 142,000 connections back in March.

The operator’s £3bn Project Lightning network expansion intends to cover a total of 17 million UK premises by 2019 with speeds of up to 300Mbps. It now has a total of 355,000 connections.

The firm has previously estimated it would reach “up to” 800,000 extra premises during 2017. However, parent company Liberty Global embarrassingly had to revise down the reported number of premises, a move that has led to the suspension of four staff and a reshuffle of its top brass.

Philip Carse, analyst at Megabuyte, described the results as "fairly muted" given the weak profit increase and scaling back of Project Lightning ambition.

He said: "Regarding the latter, the company had downgraded total premises passed at December 2016 from 718,000 to 567,000 due to the misreporting of Inactive Premises and at the time appeared to have reduced the 2017 target of new premises passed from 800,000 to 700-800,000. The company has now refrained from publishing a new target."

Chief exec Mike Fries said: "In terms of our European financials, we had a soft start to the year on the revenue front with 2 per cent rebased growth in Q1, mainly due to challenging mobile results in Belgium and the UK.”

The company blamed the net negative impact on its split-contract programmes in the UK and Belgium for depressing sales, with customers having already purchased handsets sticking to their current models rather than upgrading.

Fries added: "With respect to Project Lightning, we previously reported a reboot of the program along with leadership changes. This transformation includes the appointment of a new Lightning management team reporting to Liberty’s central T&I group and a detailed review of the program with a view towards ramping our construction activity over the next 12 to 24 months.

"Although we delivered 102,000 new premises at Virgin Media in Q1 and a total of around 700,000 homes to date, we expect that the management transition and related review is likely to result in a slower build pace than what we previously expected for 2017. We will provide an update after our second quarter. Our new build plans throughout the rest of continental Europe10 are progressing well." ®