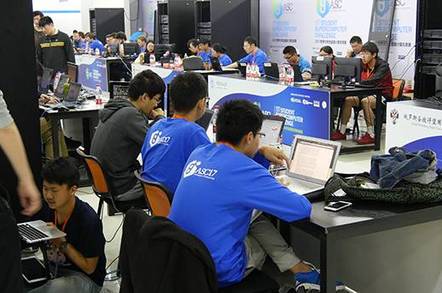 HPC Blog As a HPC cluster competition starts to wind down and deadlines are close, I like to do a video check in with the teams to see how they’re doing. Usually they’re either very relaxed or very nervous.

The relaxed ones either know where they stand and whether they’re in or out of the competition for first place or one of the other prizes. The nervous ones aren’t sure exactly where they are in terms of the other teams and they’re anxious to get one more application run in before the final horn.

Keep this in mind as you view the following videos. For the most part, they’re just a minute or two per team, but they’re very instructive as to how the team feels about their chances.

In the first video, I’m talking to Ural Federal University, Weifang U., St. Petersburg U., and NW Polytechnical University. Ural is having a good day, running AI application Paddle Paddle on their GPUs and feeling happy with the results. Team Weifang, fresh off their LINPACK and HPCG wins, are also doing well while running LAAMPS and Paddle Paddle.

St Petersburg is also happy – mainly because they are not the last team in the competition. Their university doesn’t have a lot (or any) clusters for them to train on, and they’re a new team, so one wouldn’t expect them to set the student cluster world on fire. NW University is doing well, nabbing #2 positions in HPCG, and lashing their NVIDIA P100 cards to the max. Their goal is #2 this year and an overall win next year – love that attitude!

The second video covers Tsinghua University, who is doing quite well, thank you. They’re definitely within striking distance of taking the overall championship, if not the outright favorite. Team Germany (FAU) is doing, in a word, “bad”. They’ve succumbed to their interconnect problems and we see them going through at least a couple of stages of grief (denial and acceptance) in the video. I left their booth saddened, as you’ll see in the video.

Sun Yat-Sen figures they’re doing OK in the competition today, but they’re not the confident bunch that I’m used to seeing. They allude to not getting a result on some of the applications yesterday, which is a killer in this competition, so Sun Yat-Sen stock is falling right now.

While Sun Yat-Sen might be in trouble, Ocean University knows they’re in trouble – not happy with their results at all. I try to make them feel better by pointing out that this is the toughest student competition I’ve ever seen and that they are a new team. They figure they’ll do better next year, which is a good attitude to have at this point in the event.

Team Shanghai says that everything is fine in their booth, with MASNUM and LAAMPS done. They got a 50-60x acceleration on MASNUM, which is a huge number. He characterized it as “not bad”, which is a cool badass attitude which I love. On their Paddle Paddle AI exercise, they’re building a 13 layer neural net to train their traffic model and generate a prediction of future traffic conditions. These Shanghai kids could be contenders if they’ve nailed the applications as well as they say.

I have a great and fun check in with Team Warsaw. The high point of their competition was grabbing second place on LINPACK. They expect news of their LINPACK award to spread globally, resulting in parades, statues, and the receiving of ceremonial potato and rutabaga necklaces. One team member is bubbling over with excitement over his work on the Sunway MASNUM problem. He’s seeing real progress and, as he says, “I can look at myself in the mirror and say I did well.”

Next up we’ll see who goes home with the gold and who just goes home. Nah, just kidding, every team here is a winner – they’ve beat out 210 other teams who wanted to be in their place here at the finals. It’s just that some teams will win a bit more than others, that’s all.