There be dragons? Why net neutrality groups won't go to Congress

Campaign risks total annihilation for its fear of politics 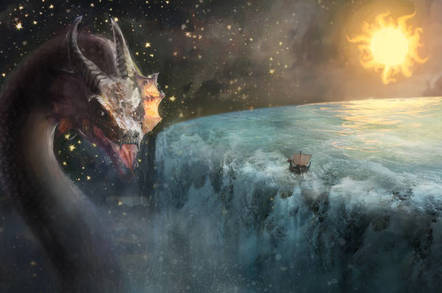 Special report When Obama pushed the FCC into extending Title II rules over US internet services in 2014, I described the President as "writing out a cheque he knew he couldn't cash".

To no one's surprise, that cheque bounced last week, when the FCC chairman formally began the process to replace those rules. Title II has been a dead duck since Americans woke up on 7 November last year to a Republican President Elect, and a Republican Congress. The end just came sooner than expected.

But that doesn't mean "net neutrality" is dead. This is a moment of opportunity for supporters to build a powerful pro-neutrality coalition in Congress. However, the campaign is so busy "grief signalling" and vilifying potential allies, it's funking a historical opportunity to go to Congress and make a lasting change.

Judging from the rhetoric of groups like Public Knowledge and Free Press, net neutrality campaigners seem to have thrown in the towel. They had bet the farm on a Clinton victory in November and now it appears there's no Plan B. Having lost the battle (to nobody's surprise) they've conceded the war.

This is startling. The most bulletproof neutrality regulations come not from FCC rules, imposed and reversed on a whim every few years, but solid law. If you're a net neutrality supporter, wouldn't you want to put it on a solid legal basis, with the authority that only Congress can provide?

For the sake of argument, let's assume two things. Firstly, that the fixed wireline broadband market in the US could be a lot more competitive: with more choice, offering better speeds at better prices. Not everyone agrees that the market is in dire need of a fix, obviously, but many readers do, so let's park that for a moment and agree to believe that cable and DSL regulations made in 2017 will still be as relevant in 2027, or 2037. That might not be the case: the trend is ominous for Big Internet; 40 per cent of Americans use mobile for data at home, and ubiquitous 5G threatens to make the cables underground as relevant as a Georgian canal after the Victorians built the train network. This is why we find telcos frantically attempting to mate with media companies. But again, for convenience's sake, let's park that one, too.

In the past, I've advised consumers concerned about the lack of broadband choice to become more active: petitioning their states to take up the cudgels, for example, or organising "switching parties". State attorney generals can step in where the feds fail. For example, the Big Tobacco settlements were hatched in southern Republican states, and Wall Street settlements following the dot.com crash were the result of state attorney generals. So much can be done at the state level. What if tobacco campaigners had thrown in the towel in the 1980s as net neutrality groups have today? It's hard to imagine.

As one of the godfathers of the internet Dave Farber pointed out last week, if you really want to enforce competition legislation then you want the FTC doing it, not the FCC: "The FTC has an ANTI-trust hammer which the FCC DOES NOT."

The FTC is far more powerful than the FCC in other ways, too. The FTC spends half its budget policing anti-competitive practices, co-ordinates with the state attorney generals, and has punitive powers to recover money from corporate wrongdoers.

All that said, a federal law would be a highly effective remedy. Net neutrality hasn't been permanently killed, it has every chance of being "saved" and put on a permanent legislative basis, just as it is in the European Union, Slovenia [PDF], and Chile, for example.

How the Supreme Court could snuff out the FCC for good

A district court this week ruled that it would reject US Telecom's request for an en banc hearing into former FCC chairman Tom Wheeler's open internet order, since his successor Ajit Pai has just made it irrelevant by promising to repeal the old rules. The petitioners of US Telecom vs FCC – including VoIP pioneer Dan Berninger, interviewed here – are determined to take repeal all the way to the Supreme Court.

The goal is to ensure that the FCC can never meddle in far-reaching telco regulation again thus extinguishing any hope that a Democrat FCC in 2020 or 2024 would restore agency-formulated neutrality rules. They're spoiling for a fight.

Grief and derision are the responses to Pai's new internet rule-making process. For now it's all smears and no politics. The question is whether the neutrality groups' reluctance to make the case for Congress is incompetence, or a deliberate and cynical strategy. And that's a fascinating question worth examining closely.

Next page: How neutrality could be made law
Page:
Tips and corrections
17 Comments