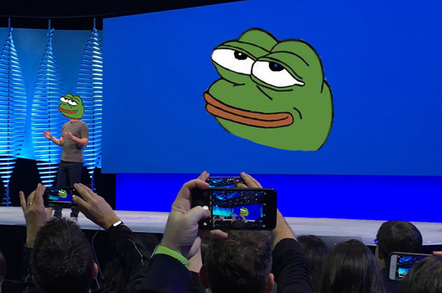 Comment Talk about chutzpah. Facebook has launched its PR campaign to combat "fake news" with the slogan "Together we can limit the spread of false news".

Together? Yes, together. Them and you. But mostly you, it seems.

It kicks off with a list of 10 tips for internet users to identify falsehoods, much as Elizabethan witch-hunters could rely on the Malleus Maleficarum to identify witches. (Usually harmless old ladies mumbling.)

On the face of it, the 10 tips may seem like prudent advice that every child should know. One or two do sound bizarre, such as (No.4) the advice to look for misspellings and "unusual formatting". Insert your own joke here. One is a non sequitur, presumably to bring the list up to a nice round 10.

And it reads strangely for non-US readers, where the norm is a vigorously competitive news market. Here, we take it for granted that publications and reporters have biases: we have a rich range of prejudices from which to choose how reality is reflected. Facebook's list reflects the prudishness of the American news media it is now trying to please, where reporters take a vow of holy objectivity.

As I pointed out shortly after the "Fake News" panic emerged as an explanation for the defeat of the Hillary Clinton, "in the USA, the Holy Word trickles down from The New York Times, the self-styled "grey lady", creating a "black market" of much more engaging news. Lately, the latter has been more confident, as the professional news market shrinks. The professionals are irredeemably corrupt, while the professionals have sought to inflate the importance of the non-professionals, giving them almost supernatural powers.

The list is informed by this. Facebook can't simply say: take your news with a pinch of salt and read widely, because then the professional clerisy, for such a long time the guardians of Real Truth, would be upset. (In fact they should be upset, but we'll come to that.).

But Facebook's tip sheet is rather more than good advice for encouraging critical thinking, and the slogan "we're in this shit together!" (I paraphrase only slightly) is a bit of a giveaway.

Subtly and inexorably, Facebook passes burden of determining the truth to the reader. The reader must now "check the author's sources to confirm that they are accurate" (No.7). Yes, you'll need your own contacts at the Home Office now. Or maybe you know somebody who knows somebody at the State Department? Surely you can conduct your own lab experiments, too? Do you have a server farm handy for some Big Data analytics? OF course you do.

Fundamentally this is because Facebook, and Silicon Valley, doesn't want to hold a mirror to itself and its role in the clickbait content economy, which is the only economic model it wants to pursue.

I became a "Fake News Skeptic" after looking at the numbers. There's no denying we live in a clickbait world, and clickbait farms churning out bizarre and false content as "news" is a large part of online life. But the numbers didn't seem to support the proposition that the fake stories had a major impact. Not one story in Facebook's "news feed" gathered more than one million engagements, with an "engagement" being as ephemeral as an upvote.

Perhaps American Democratic presidential candidate Hillary Clinton lost that election because she had a lot of baggage, and forgot to campaign in swing states like Michigan until it was too late? And perhaps, in turn, the media spent so much time working themselves into a righteous frenzy over rival Republican candidate Donald Trump's calculated outrages that they forgot to report the exact appeal he was making in the rustbelt as an old school Democrat.

Yet Facebook's reaction to the accusation was very revealing. If you recall, the company had introduced "News" with low-paid graduate staff choosing the sources. After accusations that these favoured "liberal" (sic) media, Facebook replaced them with an algorithm. This incentivised the clickbait industry even more.

If you recall, Facebook's first reaction was outright denial. But then perhaps petrified that people would realise that Facebook's News wasn't all that influential, Zuckerberg did an about-face, and said he was taking it jolly seriously. Yes, very seriously indeed.

But not so seriously that Facebook does anything to change the incentive structure for producing clickbait. Facebook could invest heavily in news and set such a high threshold for quality that clickbait couldn't get into its news feed. It doesn't. Facebook prefers to have its cake and eat it: much as Wikipedia wants all the kudos of being an "encyclopaedia", an authority, but none of the responsibility.

Facebook wants to be how you get your "news", but it doesn't do anything much to improve what you read. Last month it promised to take on 3,000 staffers, so we'll see. But there's no indication that it's changing its fundamental business model of aggregation and ads.

In other words, Facebook is saying: enjoy swimming in the sewer. Keep your mouth closed at all times. Try and swim round really obvious turds. The sewage will continue unabated, thanks to Facebook.