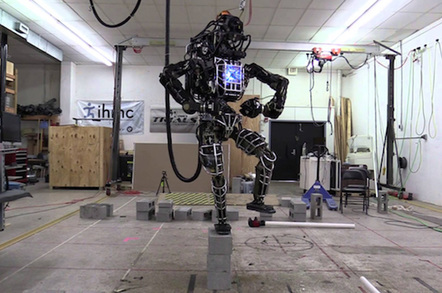 The Pew Research Center's latest report, The Future of Jobs and Jobs Training, warns that machines are eating our brains.

"Brains" here refers to the contents of our brains, our skills, rather than actual gray matter. "Machines are eating humans' jobs talents," the report declares as a prelude to its exploration of the consequences of automation on education and employment. It's an awkwardly phrased conceit, but you get the idea.

The prospect of widespread joblessness as a consequence of clever software and nimble hardware is a bit less alarming than ravenous robots, but not much. Given a sufficiently large segment of people without economic value or opportunity, it's hard to see how social order could be maintained.

The Pew Center isn't directly concerned with the automation/employment conundrum: Will advancing technology create more jobs than get destroyed through automation? Or will technologically advanced nations have to figure out how to stave off revolution and anarchy driven by massive unemployment?

When the Pew Center looked at that issue three years ago, it found no clear answer: 48 per cent of the people surveyed expected more jobs would be lost than created, while 52 per cent said the opposite.

More recent academic work has suggested that automation is getting rid of more jobs than it is creating.

Whatever the case, the Future of Jobs report examines whether educational methods and institutions can keep pace with the need for training and re-training as automated systems become capable of doing much of the physical and knowledge work that people depend on for their livelihoods.

"A central question about the future, then, is whether formal and informal learning structures will evolve to meet the changing needs of people who wish to fulfill the workplace expectations of the future," the report says.

People turn out to be rather optimistic in the face of the slow-motion robot takeover. Some 70 per cent of 1,408 people surveyed believe education programs will be successful in preparing people for the future.

Yet, the worry-free crowd could be more convincing.

For example, Justin Reich, executive director at the Massachusetts Institute of Technology (MIT) Teaching Systems Lab, said, "Educators have always found new ways of training the next generation of students for the jobs of the future, and this generation will be no different."

Reich expects the established systems of job training – school systems – will continue to play a major role, even as he concedes that dwindling public funding will make things harder.

As an argument, "we've always done it" contemplates no possible variation in outcome.

Among the 30 per cent of pessimists, there are doubts educational resources can keep pace with technological change and doubts that society as it is currently organized can adapt.

It turns out I am part of this group, having answered a Pew query for this survey sometime last year, before I joined The Register.

But entrepreneur Jennifer Zickerman frames the issue succinctly: "The problem of future jobs is not one of skills training – it is one of diminishing jobs. How will we cope with a workforce that is simply irrelevant?"

Nathaniel Borenstein, chief scientist at Mimecast, mentions the rather touchy issue of wealth reallocation. "I challenge the premise of this question [that humans will have to be trained for future jobs]," he said. "The 'jobs of the future' are likely to be performed by robots. The question isn’t how to train people for nonexistent jobs, it's how to share the wealth in a world where we don’t need most people to work."

And an anonymous scientific editor offered perhaps the darkest take on our future: "Seriously? You're asking about the workforce of the future? As if there's going to be one? ... 'Employers' either run sweatshops abroad or hire people in the 'first world' to do jobs that they hate, while more and more unskilled and skilled people end up permanently on welfare or zero-hour contracts. And the relatively 'job-secure' qualified people who work in the 'professions' are probably a lot closer than they think they are to going over that same cliff. The details of how they earn their credentials aren't going to be an issue."

Without some form of intervention, robots may eat our brains and our lunch. Enjoy your stable job driving for Uber, with its gold-plated health plan, generous retirement benefits, and profit participation program, while it lasts. ®