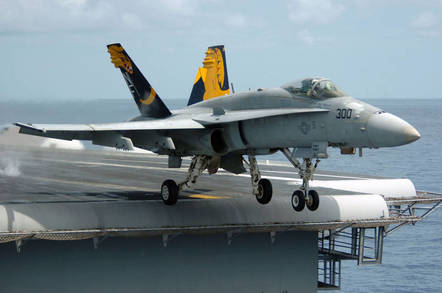 The US Navy has tested a software package that will allow aircraft carriers running it to use its planned drone air-to-air tankers for communications relay and surveillance duties.

The MD-5 Unmanned Carrier Aviation Mission Control System (UMCS) was tested under lab conditions using a lorry in place of the drone, according to US website Defence Systems.

In software terms UMCS is not a big leap: USN developers plugged existing mission management, planning and sensor control software into the US Navy's Common Control System framework, tailoring each element as required to talk to the "drone" systems being used.

"We have had the opportunity to leverage many existing technologies and capabilities from other Navy platforms and integrate them into this," said USN Captain Beau Duarte, in command of the USN's Unmanned Carrier Aviation programme.

This suggests that the USN is looking at drones as relays: that is, a means of extending its communication and surveillance systems' range. Link 16-compatible aircraft can already exchange tactical data within the range of the aircraft's own systems, so an airborne relay station has obvious potential for extending the range of distributed surveillance from, say, an aircraft carrier's own fighters.

UMCS will eventually be used in American service with the MQ-25 Stingray aerial refuelling drone. Originally conceived as an all-singing, all-dancing unmanned alternative to traditional naval aircraft, the MQ-25 will now mainly be used for topping up the tanks of manned aircraft – and, it seems, some air and sea surveillance work. The drone is specifically being developed to be resistant to hackers, according to the USN. ®