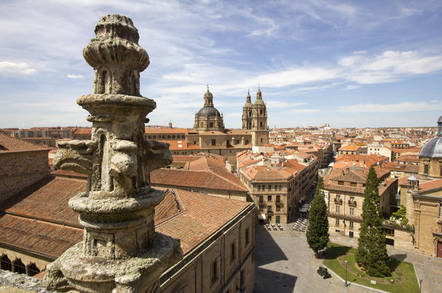 The historical city of Salamanca, Spain, as seen from the Old Cathedral. Pic: Jan Kranendonk/Shutterstock

Startup Olé 2017 Hardware tech and companies from across the world came together at the EU-backed Startup Olé conference in Salamanca, western Spain, last week.

Roughly 150 startups had stands and 50 participating in different pitches during the well-attended two-day event in the historic university town. Similar events in the UK would be dominated by app developers but in Spain it was a mixed bag of homegrown and far-flung talent, including representatives of 10 Armenian startups.

Tristan William, a lynchpin in organising the conference, explained: "The invitation of Armenia along with an initiative from the European Commission (Eastern Partnership) was to connect the EU to close neighbours and encourage trade and scaling up across borders. This was similar for the other network launches like LATAM, China, Korea, Africa etc. Startup Europe and we [Startup Olé] want to build a more global economy for startups and make it easier to both access and provide products or services internationally."

The Spanish crop featured diverse companies across a range of technologies including food, travel, energy and consumer hardware, as well as information technology. Among the firms we met were Cleandrone, which is using UAVs to wash windows of high-rise building or panels on solar farms.

The third annual Startup Olé showcase also featured Drone Hopper, a startup that wants to use drones for firefighting and pesticide spraying. Several firms were based on harnessing 3D printing technology, among them a company making casts for both people and pets with broken bones.

"While you still get the B2C startups (like photo sharing, e-commerce etc), an encouraging number are B2B in the new area of exponential technologies (AI, robotics, drones, VR/AR, 3D printing)," Haslam said. "The coming generation don't have as many hangups about speaking English or hustling as the previous generation had. And with the Fondico there is money available.

"What Spain is still missing is scaleup mentors (guys like Bernardo Hernandez) who can support entrepreneurs going from startup to scaleup. Silicon Valley still has that advantage but Spain now has the money, the knowhow and the ambition."

The Spanish government was mandated to put money into startups as part of the 2008 bank bailout by the EU, and Startup Olé is among the results.

The development of tech startups is very much market – rather than government – driven in the UK and (to an even greater extent) the US. Haslam acknowledged this while noting that "picking winners has worked well in Asia", arguing it isn't necessarily a bad approach, especially for countries such as Spain.

"I think the model is for the big companies (on the CAC40, IBEX55, DAX30 etc) to stop funding incubators and accelerators," Haslam said. "Instead they should set up tech-scouting units to hunt for technology. What startups need most is for people to buy their products, a 'purchase order and proof of concept' is more useful to them than just money and PR."

Startup Olé incorporates Startup Europe, the European Commission's initiative for startups. Panels on fintech, how corporates interact with startups, and universities' role in startup ecosystems featured during the show as well as a pitching competition. Your correspondent took part in a 30-minute panel on media for startups during the conference.

With a nod to the upcoming French presidential run-off, one panel was entitled "Global Trend Against Globalisation: What Does It Mean for Enterpreneurship and Fintech". Talk of the Payments Service Directive 2 and whether it might lead to Amazon and Google's entry to the consumer banking space dominated the fintech panel. PSD2, an open architecture framework for banking due to come into force next year, raises security issues but is likely to be a boon for fintech firms. The globalisation panel agreed that Brexit will have a huge impact on the finical services market.

The best fintech pitch was by WeTech (Wearable Technologies SL) with their products that combine jewellery and fashion with payment tech and other wireless services. More details of the conference can be found on its website here. ®