How about that stripey suntan then, boyo? 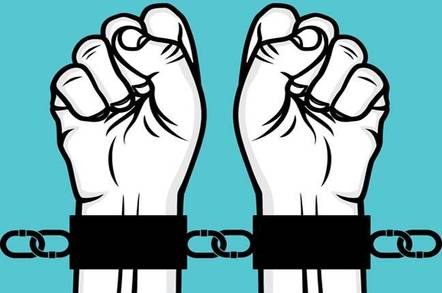 Ullah, as we reported on Friday, was caught with, among other things, a USB cufflink loaded with a copy of the Linux distro.

The former insurance worker pleaded guilty to five terrorism charges, including being a member of Islamic State and two charges of possessing terrorist material.

Vice’s Motherboard offshoot had a look round his “basic Wordpress” blog aimed at promoting Islamic State propaganda. They noted that police investigators seized more than 6.1 terabytes of data from his Cardiff home.

Excitable folk on the internet started asking whether the UK was trying to outlaw basic HTTPS security when Ullah was first arrested last year, thanks to one of the original charges against him being that he was running an encrypted version of his blog.

It turned out that his blog was partly hosted on ZeroNet, a peer-to-peer service that keeps websites online without a central server.

Ullah’s extended sentence includes a further five years on extended licence after his release, meaning he will be subject to close supervision by the British authorities. ®