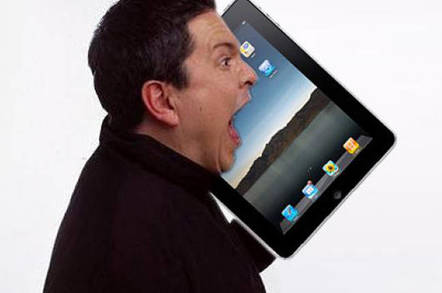 Apple's iPad sales continue to plummet, and iPhone sales are going flat due to over-hype – but the Cupertino idiot tax operation was still able to haul in a hefty $11bn profit in the past quarter.

The iGiant said that for the three months to April 1, its second quarter of the 2017 fiscal year, it recorded:

Despite shipments and revenues being virtually flat on the year, CEO Tim Cook talked up the success of what he called "continued robust demand" for the iPhone.

"We've seen great customer response to both models of the new iPhone 7 (Product)RED Special Edition and we're thrilled with the strong momentum of our Services business, with our highest revenue ever for a 13-week quarter," Cook said, blaming the flat sales instead on anticipation of the not-yet-real iPhone 8.

That's right, Apple blames hype around its iPhones for its sales problems. The irony.

China once again proved to be a problem for Cook and Co. While Europe and the Americas reported double-digit growth (10 and 11 per cent, respectively), revenues in China for the quarter were down 14 per cent.

You can grab a transcript of Cook's conference call with analysts earlier today, here. Apple shares were down 1.87 per cent in after-hours trading at $144.75. ®