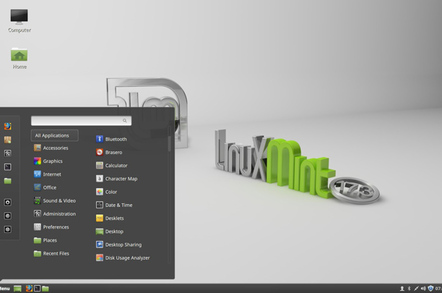 The Linux Mint desktop – as used by Samata Ullah

A paranoid Welsh Muslim who wore gloves while typing on his laptop, admitted being part of Islamic State, and, gasp, harbored a copy of Linux Mint, has been described as a “new and dangerous breed of terrorist.”

Samata Ullah, 34, who also used voice modulation software to disguise his thick Welsh accent while making instructional videos about encryption, pleaded guilty to five terrorism charges at Cardiff Crown Court. He was due to be sentenced Friday afternoon.

The former pensions administrator had bought 30 sets of cufflinks containing tiny USB sticks from eBay, the court was told. On one of those was a copy of harmless open-source operating system Linux Mint, while others contained military manuals for guided missiles, which Ullah was said to have been preparing to translate for the Islamic State terrorist organization, as reported by Court News UK.

Prosecutor Brian Altman QC branded Ullah a “cyber terrorist” and said he was part of a “new and dangerous breed of terrorist.” Ullah admitted to five charges:

Another charge, of directing terrorism for Islamic State by hacking information from its enemies, was left to lie on file.

Altman added: “We say [Ullah] employed his not-inconsiderable self-taught internet technology skills to further the cause of terrorism ... all this he did from the relative security of his bedroom where he lived alone.”

The court heard that the FBI picked up messages sent between Ullah and alleged Islamic State terrorist Abu Fidaa, who is awaiting trial in Kenya. He was also alleged to have encrypted his blog, though The Register understands this means he hosted it on the anonymizing network Tor, a corner of the internet commonly referred to as the “dark web.”

Ullah, of Rennie Street, Riverside, Cardiff, gave 13 no-comment interviews to police and two prepared statements claiming he only wanted to gain an “understanding of the troubles of the Muslim world.” He was first arrested in September last year, with his trial taking place this March. Reporting restrictions were in force for the duration of the trial, though Judge Gerald Gordon lifted those at the conclusion of the trial, adjourning sentencing to 28 April.

Speaking after the March trial, Metropolitan Police Counter Terrorism Commander Dean Haydon said: “Just because Ullah’s activity was in the virtual world we never underestimated how dangerous his activity was. He sat in his bedroom in Wales and created online content with the sole intention of aiding people who wanted to actively support ISIS and avoiding getting caught by the authorities.”

“This is just the sort of information that may have helped people involved in planning devastating, low technical level attacks on crowded places as we have seen in other cities across the world,” added the policeman. ®