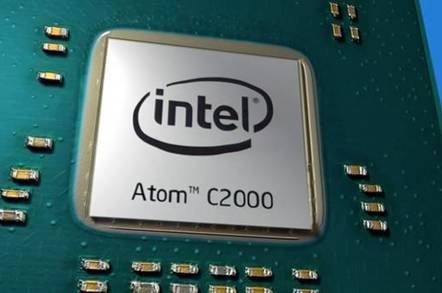 Intel finally has reworked its flawed Atom C2000 chips, which have been failing at a greater-than-expected rate for about a year and a half.

On Wednesday, through an update to its chip errata [PDF], Intel revealed that its Atom C2000 chip family has a new C0 stepping, up from the previous B0, meaning at least some parts of the chip have been redesigned.

Version C0 fixes problems with the chip's low pin count (LPC) bus clock outputs, and introduces a new specification for the LPC interface. Specifically, the C0 stepping resolves chip bug AVR54, which describes how the "system may experience [an] inability to boot or may cease operation" permanently.

As a side-effect of the C0 redesign, most of the LPC pins on the chip package cannot be reassigned by software as general purpose IO (GPIO) if they are not needed for timing signals, as was possible in previous Atom C2000 steppings.

So if you've designed a device that relies on GPIO signals from the LPC pins, you'll have to redesign your motherboard if you switch from self-destructing B0 Atoms to the non-bricking C0 version, because the GPIO functionality has mostly been taken away. All in all, that's an expensive move for manufacturers.

"All of the LPC interface signals are defined as muxed with GPIO signals," reads Intel's errata, dated April 2017.

"This implies that if the LPC interface is not used in your design these signals can be GPIO signals. This specification change removes the muxed support of GPIO signals for all LPC signals except LPC_CLKOUT1. These signals must be left in their default (LPC) state and not de-selected via software to be GPIO pins."

In January, Intel said that the Atom's LPC clock bus outputs (LPC_CLKOUT0 and LPC_CLKOUT1) could stop functioning, rendering affected devices inoperable. Without a clock signal governing circuitry, such as the boot ROM, Atom-equipped gear can't even start up. The device bricks itself, in other words.

That same month, Chipzilla's chief financial officer warned of a product quality issue, noting that the company had set aside funds to cover the cost of dealing with an unspecified design flaw.

The nature of the problem became clearer in early February when Cisco issued an advisory warning. A variety of its products sold prior to November 16, 2016, the network gear maker said, contained a faulty clock component that was failing at a rate greater than anticipated after 18 months of use. The common component in the Cisco hardware was an Atom C2000 line chip.

We've reached out to some of the affected organizations to see whether they've received C0 inventory yet but have not heard back.

In February, an Intel spokesperson told The Register that the company had a board-level workaround for the then-current B0 production stepping of its Atom chips and said the company planned to "implement and validate a minor silicon fix in a new product stepping that resolves this issue."

Intel is expected to report its Q1 2017 earnings on Thursday. ®