Basically what he was saying while bragging about sales 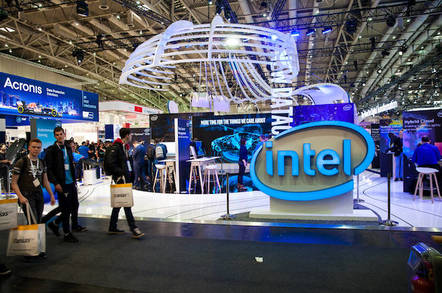 Intel today revealed that its first-quarter earnings and sales were more or less as forecast, sending its stock down in after-hours trading.

Analysts had anticipated a Q1 2017 earnings-per-share figure of $0.65, non-GAAP, in line with Chipzilla's guidance. The Santa Clara, California-based processor giant reported EPS of $0.66, up 12 cents year-on-year.

Intel's total revenue, in the three months to April 1, grew eight per cent, coming in at $14.8bn, in line with projections averaging $14.81bn and representing a first quarter record. The company's GAAP gross margin reached 61.8 per cent, up 2.5 percentage points year-on-year.

Intel said its strong – read, high – average selling prices boosted its sales figures. Intel also has a solid stranglehold over data center compute processor sales worldwide, and has the desktop market pretty much sewn up, too. These facts are not unrelated. In other words, Intel kept its prices high and people paid them. That's the joy of a monopoly.

During the first quarter, Intel's operating income (GAAP) was $3.6bn, up 40 per cent from the same period a year before. Its net income came to $3bn, up 45 per cent.

"The first quarter was another record quarter, coming off a record 2016," said CEO Brian Krzanich after the figures were published. "We continued to grow our company, shipped our disruptive new Optane memory technology, and positioned Intel to lead in new areas like artificial intelligence and autonomous driving.

"The average selling price strength we saw across nearly every segment of the business demonstrates continued demand for high-performance computing, which will only increase with the explosion of data."

Rising PC sales appear to have helped. Earlier this month, IDC reported that PC sales had increased 0.6 per cent in Q1 2017 year-over-year. The data consultancy had previously forecast a 1.8 per cent decline for the period.

Chipzilla's Data Center Group posted a similar six per cent revenue increase on the year-ago quarter, reaching $4.2bn during Q1. Its Internet of Things Group brought in $721m, an 11 per cent increase. And the Programmable Solutions Group provided $425m, up 18 per cent.

The Non-Volatile Memory Solutions Group, meanwhile, grew revenue to $866m, up 55 per cent. Analyst Patrick Moorhead, of Moor Insights & Strategy, attributed this gain to Intel's acquisition of Altera and to constrained memory supply across the industry.

The lone dark spot was the Intel Security Group, which reported $534m in revenue, a one per cent decline.

Less enthusiastic about PC-oriented aspects of its business than it was in the past, Intel in early April completed its plan to sell a majority stake in its Security Group, which regains the name McAfee, to investment firm TPG.

During Intel's conference call with investors, Krzanich described the Security Group sale as part of an effort to become a more efficient business. "Focus was one of our objectives in establishing McAfee as an independent cybersecurity company months ago," he said.

CFO Robert Swan said Intel is committed to reducing its spending as a percentage of revenue by two points from 2015 to 2017.

Intel, said Krzanich, is in the midst of transforming itself from a PC-centric company to one focused on the cloud and connected devices. The company's plan to acquire computer vision biz Mobileye points to a business strategy less tied to personal computers.

Spending on research and development, as well as mergers and acquisitions, came to $5.4bn, down one per cent year-on-year.

Intel reported $80m in restructuring and other charges for the quarter, some of which presumably went to redesigning its Atom C2000 chips, to eliminate the chip's flawed Low Power Clock bus outputs.

Krzanich said Intel's Coffee Lake family of CPUs is on track to debut this summer. ®