Your best excuse for using Firefox or Chrome is just that 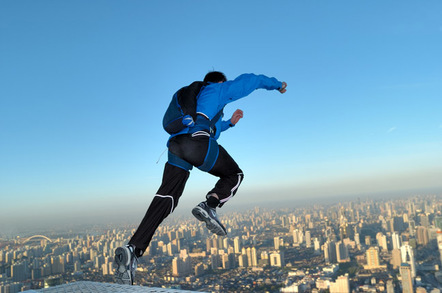 May's nearly here, and you know what that means. Yet another round of monthly browser stats articles. If past trends are an indication of future development, we'll see the continued loss of market share by Microsoft’s Internet Explorer and the rise and rise of Google’s Chrome.

I’m old enough to remember the browser wars of the 1990s, when Microsoft arrived late with IE yet still saw off NCSA Mosaic and Netscape Navigator.

Of course, there were various moans, gripes and court cases around the anti-competitive nature of having an embedded browser in Windows, but unsurprisingly IE gained a dominant presence during the early noughties until the late 2000s.

There was a healthy incursion from Mozilla’s Firefox (rooted in Netscape), which in 2009 had a 27 per cent share versus IE’s 65 per cent. Chrome chipped away at IE until in early 2012, when it overtook Microsoft with 32.8 per cent of the market to Redmond’s 31.9 per cent.

January 2016 was an interesting milestone, because IE dropped below Firefox in popularity for the first time ever. So as of April 2017, IE has a mere nine per cent of the market, with Chrome at 63 per cent and Firefox at 15 per cent – according to StatCounter.

It’s understandable, of course, that Chrome has taken over the browser market. Google has a development budget that most of us can only dream of, and Chrome is truly multi-platform on both traditional computers and mobile devices. Microsoft has handicapped itself in historically trying to drive Windows sales by limiting the versions of Windows that new versions of IE could run on. Chrome helpfully stepped in.

Chrome also works incredibly well and is very fast – it’s my default browser on the Mac that I wrote this on, for instance, and I use Chrome a lot on my iPhone too – despite both of the above having an in-built Safari browser. Chrome’s not completely free of bugs: every once in a while I have to fire up Safari because it renders some pages properly where Chrome has a bit of a tantrum.

Which, going back to Microsoft, is an interesting point about IE too. In recent years, I’ve seen corporate systems bouncing users into Chrome for certain not-so-HTML-compliant SaaS applications, for instance, because they found it more tolerant of bad page code than IE was. To be fair, Microsoft seems to have got its act together with version 9.0 onwards in my experience, but in the days of Windows XP, life could be difficult.

So here we are, then. Will IE simply vanish from view? Will Microsoft just throw up its hands and say: “Sod it, let Google do all the browser development, and we’ll concentrate on other stuff where there’s less competition”? In a word: no.

And the reason is simple. Back in the day, IE was just that: a browser that let you explore the internet. You could access HTML-based Web pages using HTTP, and you could transfer files with its FTP functionality. But then over time the difference between Explorer (ie, the standard Windows user interface) and IE became less and less obvious. So you could fire up an Explorer window and point it at, say, a local disk or CD-ROM drive using a drive letter assignment (C:\ for the local hard disk, for instance, or P:\ for a network share, or if you’re really old A:\ for a floppy drive). Or perhaps a UNC (Uniform Naming Convention) path (\\myserver.local\Finance\Reporting, for example).

It was an obvious next step, though, to allow the user to bash a Web site Uniform Resource Locator into the location bar of Explorer and have it bounce you to a Web site or FTP server. All of a sudden Internet Explorer was no more – basic Explorer would let you explore the Internet just like you could explore your more local repositories.

Wind on a few years and the Internet is now just an extension of our local computing world. If I fire up a new Finder window on the Mac I’m typing this on I can click an icon and explore my Documents directory on the local hard disk, but similarly clicking the icons around it will throw up windows to my DropBox, my Google Drive repository or my iCloud file store. And the same applies to the Windows 10 laptop sitting beside me: my personal OneDrive store and the corporate SharePoint world are just a click away, and I use it just as I would a local disk.

All of which could be thought of as further nails in IE’s coffin – after all, you no longer need a browser to access files that live out there on the Internet. Except there’s one further development that suddenly brings IE back to the front and makes it relevant again: Web-based applications.

IE is Microsoft’s window onto their ever-growing cloud application suite. There’s just no disconnect any more between the desktop and the cloud when it comes to applications, and – in fact – I don’t actually need the desktop versions of my office applications in order to work with Microsoft Office functionality. Browse to an Office 365 world and you can open your Excel, Word or PowerPoint docs entirely within a browser: IE – or Edge, its replacement as the default browser from the release of Windows 10 – is merely a window onto your Microsoft applications wherever they or the corresponding files are located.

Could I use Chrome to access the same stuff? Actually yes, I could – and I do. Google have an excellent suite of cloud-based office applications of their own, but my Office 365 world seems to work pretty well with Chrome too – which is handy given that these days there’s not a Microsoft browser for non-Microsoft platforms (IE for Mac bit the dust back in 2003, after all), so it lets me work with my cloud apps on non-Windows platforms.

But can I be certain that Microsoft’s offering will work with my Office 365 world? Yes, because Microsoft have focused on this being the case by paying firm attention to cloud-based applications – and in the case of Edge, Microsoft has let the likes of Mozilla and Google get slightly ahead in compatibility with Web standards while it has focused on the application interface. Now Microsoft seems to be on a mission to catch up – obvious additions being support for the WebKit engine and various other standards that the competition have had for a while.

And of course the integration between the Microsoft browser and the Office 365 cloud – including ancillary stuff like Active Directory – is native and seamless. Or more accurately, the integration between the Microsoft client system and the Office 365 cloud is seamless. Windows is now just that – a window onto the cloud – and the desktop app that you used to use to access the Internet is just an integral part of the Windows client.

So is IE sliding into irrelevance? Yes, I think it is, but not for the obvious reasons as suggested by the next round of monthly browser stats.

Yes, Chrome has stolen Microsoft’s dominance in the browser market, but what actually is “the browser market” – and is there really one any more? It seems a bit odd to think that a browser is an application that runs on a computer, rather than being an integral part of the operating system’s functionality for accessing information repositories.

Whilst writing this I looked around to see why people think it’s still a good thing to use, say, Chrome or Firefox instead of IE or Edge, and a lot of the reasons can best be termed “tenuous.”

Chrome is fast, says one article, because it uses WebKit (well, IE is now able to emulate WebKit operation). Chrome can open multiple default pages when you fire it up (sorry, not exciting). Firefox has loads of extensions (fair point – Edge in particular is lacking but it’s early days). Opera has “Speed Dial” that makes it easier to get to your favourite pages.

Realistically, though, Chrome will remain popular in the traditional sense of web browser for as long as it’s truly multi-platform: it’s got the market sewn up in the non-Windows world for the foreseeable future unless Google does something really dumb – and even a big cock-up would probably only dent their popularity a little.

But, in the Windows world? Windows is just the way you access Microsoft applications wherever those applications reside, and that’s where Microsoft is focused, letting Google, Mozilla and Apple spend millions to provide technology that lets people access their cloud apps from these pesky other operating systems.

The whole concept of a browser has already slid into irrelevance, then: it’s just that Microsoft seems to be the first to realise it. ®