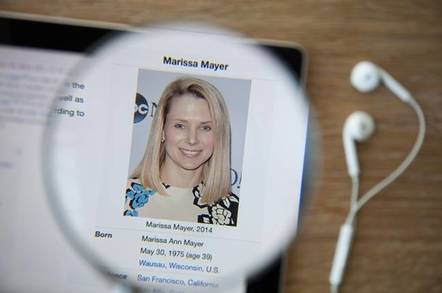 When Yahoo! boss Marissa Mayer leaves the merged Verizon-AOL-Yahoo! behemoth, as is expected soon, she'll walk away with stocks and cash today worth $186m.

In paperwork submitted to America's financial watchdog on Monday, Yahoo! revealed that its CEO, who presided over its plunge into obscurity, owns 4,492,286 shares of stock in the company.

It is estimated that, after fees and costs, Mayer stands to pocket nine-figures from the sale to Verizon. That number is somewhat foggy, as it is based on Yahoo!'s stock price, something that's likely to change between now and when the deal with Verizon is finalized.

That payout includes a $23,011,448 "golden parachute" package that comes due should Mayer leave the company within 12 months of the deal with Verizon being finalized. This is all but a certainty, given that Verizon plans to bundle Yahoo! with fellow internet has-been AOL under a unit led by boss Tim Armstrong.

Perks due to Mayer in that package include one year of base salary at $1m, a $2m bonus payment, 12 months of COBRA health insurance premiums, and $15,000 to cover "outplacement services" in case her time at Yahoo! and Google does not prove sufficient to land Mayer another job.

The $186m also includes stock options Mayer has on an additional 2,879,991 shares of stock and restricted stock unit awards that would add up to around $76,764,790, based on Yahoo!'s own estimation. According to the SEC filing, Mayer is the third-largest individual shareholder in the Purple Palace, behind only cofounder David Filo (of "David and Jerry's Guide to the World Wide Web" fame) and Starboard Value CEO Jeffrey Smith.

Yahoo! agreed last year to sell off its core internet business to Verizon in a $4.8bn buyout deal. The price was knocked down to $4.48bn following Yahoo!'s disclosure of a string of major hacks on its email service. Yahoo! has said that it hopes to finalize the deal in the coming months.

Following the sale, Yahoo!'s core business will be absorbed by Verizon and shareholders will be left with a stake in a new company based on Yahoo!'s shares of Chinese internet giant Alibaba. ®