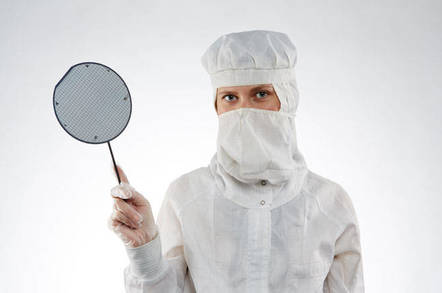 Nikon has declared global legal war on rivals it says are ripping off crucial optical technology it developed to print microchips.

The Japanese camera giant claims Netherlands-based ASML and Germany's Carl Zeiss together infringed more than a dozen patents it holds in the field of immersion lithography – the high-tech process by which a thin purified layer of liquid is used to refract light waves to, ultimately, precisely etch integrated circuits onto silicon chip wafers.

In other words, Nikon reckons ASML and Zeiss owe it big time for technology used to intricately craft today's powerful processors and other state-of-the-art semiconductors. These sorts of legal rumblings in the production line aren't particularly welcome in the delicate world of microchip manufacturing.

(If you've got an hour or so to kill, and are interested in this stuff, Intel's Sam Sivakumar gave a guest lecture at Stanford introducing modern lithography.)

As chip makers have shrunk the size of transistors and other components on the surface of their silicon, demand for immersion lithography equipment has increased. Nikon believes that, in the past few years, ASML and Zeiss have made billions selling this technology to microchip fabs – and that Nikon owns the rights to this tech and thus wants its cut of the dosh.

Nikon claims that ASML alone made €3.5bn (US$3.8bn) last year from selling immersion lithography machines, while Zeiss took a portion for the optics it supplied to ASML.

The Japanese giant said that it had cross-license agreements with both Zeiss and ASML dating back to 2001, but the royalty deals ended in 2009, at which point a four-year non-assertion term prevented either side from filing suit. Now, with both the licensing and the non-assertion terms over with and no new agreement reached, Nikon is sending in the lawyers.

"We firmly believe that ASML's unauthorized use of Nikon patents on our most advanced technologies, including immersion lithography technology, has enabled ASML to expand its lithography business," said Nikon president and representative director Kazuo Ushida.

"Respect for intellectual property is fundamental to fair and healthy competition, and is essential to promoting innovations that provide society with the most advanced products and services."

Nikon wants to get a piece of those profits for itself by filing 13 formal infringement claims against ASML:

ASML, meanwhile, claims it is Nikon that refused to strike a new licensing deal, calling the lawsuits "unfortunate."

"Nikon's litigation is unfounded, unnecessary and creates uncertainty for the semiconductor industry. Over the past years, ASML has made repeated attempts to negotiate an extension of its cross-license agreement with Nikon," said ASML president and CEO Peter Wennink.

"We are disappointed that Nikon did not make any serious efforts to negotiate and has opted for legal action instead. We continue to believe that a negotiated outcome would have been preferable for the industry, which thrives on innovation and collaboration."

A spokesperson for Zeiss was not available for comment. ®