It's a Wright off: NetApp confirms SolidFire boss on hiatus, 'will be back' working on other stuff 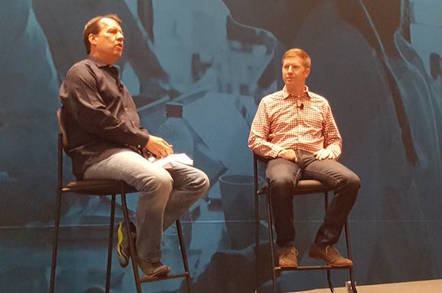 +Comment NetApp says its SolidFire chief Dave Wright is on hiatus – and his role upon his return will not involve running the storage organization he founded.

Exactly what he'll be doing when he gets back will be decided by NetApp's CEO George Kurian and cofounder Dave Hitz. Following our story earlier today on Wright taking a break, the parent biz confirmed the move within the past hour – and told The Register:

NetApp SolidFire general manager and SolidFire founder Dave Wright has informed his team of his plans to take some time off – his first professional hiatus in more than 18 years, as he has founded three startup firms one right after the other.

His role upon return to NetApp is being defined in conversations with NetApp CEO George Kurian and NetApp company founder Dave Hitz. Wright’s new role will focus on Next Generation Data Center technology, for which he has deep passion and knowledge. Dan Berg, currently VP of production operations for SolidFire, is acting as SolidFire GM on an interim basis as NetApp looks for a new leader for this team.

Meanwhile, Wright told us: “I haven’t left NetApp – try my NetApp email, it works. I am taking some time off this summer to travel with my family, but I plan to be back in the Fall.”

Essentially: while Wright hasn’t left NetApp, he no longer has operational responsibility for running the SolidFire business unit, and he is taking several months off, leaving an interim guy in charge, while he works out a new role with George Kurian and Dave Hitz.

SolidFire inside NetApp has lost its founder and guiding exec, and the SolidFire-based hyper-converged system will not be developed under Wright’s guidance.

Val Bercovici, who most recently served as chief technology leader for the NetApp SolidFire team, shared with colleagues in mid-April his intent to leave NetApp and pursue new opportunities. We wish Val all the best and thank him for his many years of contribution to NetApp.

Dave Wright is an entrepreneur and may, after three startups, be used to the fast-moving and nimble startup scene, and less comfortable with the politics and inertia that can exist in a NetApp-sized corporation. The fact that a next-generation data center technology role is being worked out is encouraging from the point of view of him staying at NetApp.

Clearly Kurian and Hitz prefer him not to leave. We’d hazard a guess that, after NetApp’s $870m acquisition of SolidFire last year he no longer needs to work for the money, and so the role that is being worked out needs to be one he’s going to be comfortable with.

But who knows what might happen on Wright’s travels? A three-time startup entrepreneur might feel like a fourth trip into the startup world. On the other hand, he could well have a so-called intrapreneurial role inside NetApp. ®