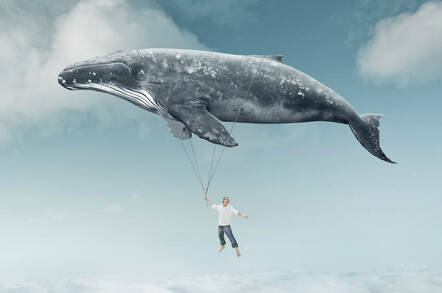 Docker seemingly became Moby this week, a rebranding exercise that sparked more confusion than clarity among those following container software.

So at DockerCon in Austin, Texas, on Tuesday, the container bellwether announced the Moby Project – a new name for the open-source software from which the commercial versions of Docker are derived. Moby also serves as a starting point to create customized container software for specific infrastructure.

In a phone interview with The Register, David Messina, SVP of marketing and community for the biz, said DockerCon attendees – mainly system builders who deal with containers on a technical level – got the message.

"Project Moby is the new upstream for the Docker project," Messina said, using Git terminology for the source code repository from which a project is cloned.

The less initiated, Messina conceded, may have misunderstood. "Anytime you make major enhancements in the open source world, sometimes there's confusion," he said. "But that's not the intent."

Even so, the company's decision two years ago to separate its container software from its infrastructure components – such as runc, containerd, InfraKit, and the recently introduced LinuxKit – has made it difficult for those not deeply involved with containers and command line arcana to understand how all the moving parts relate to one another.

GitHub connectivity problems magnified the misapprehension that Docker had disappeared. Patrick Chanezon, a member of the technical staff at Docker, said that the GitHub repo changeover created some technical issues that required the intervention of GitHub tech support staff.

The explanation Docker cofounder and CTO Solomon Hykes provided in his pull request compounded the problem with its brevity: "Docker is transitioning all of its open source collaborations to the Moby project going forward."

Some people took this to mean that Docker had been renamed Moby. In fact, for those using Docker CE or EE, nothing changes. Moby is only relevant for organizations and individuals developing specialized container software based on the code formerly known as Docker.

To quantify the puzzlement in the imprecise language of GitHub emoticons, the post by Hykes, at the time this article was filed, had generated 73 thumbs-up votes, 461 thumbs-down votes, and 377 confused votes, alongside 18 happy laugh emojis and 69 hooray emojis, and 16 heart emojis.

In the pull request discussion, Hykes acknowledges that communication could have been handled better. He said as much in an attempt to quell complaints about the name change on a Hacker News thread. "It appears that the explanation in the pull request is not very clear," he said. "Sorry about that." ®