Q. Why is Baidu sharing its secret self-driving sauce? A. To help China corner the market 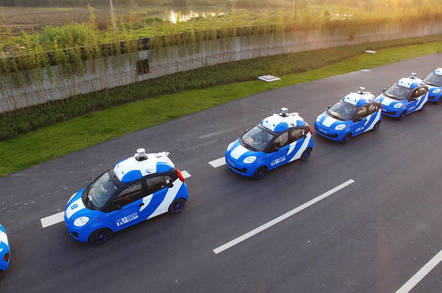 Big corps around the world are racing to the finish line of building and selling the first proper autonomous rides. Competition is fierce – in California, 30 organizations including Tesla, Waymo, Honda, Ford, and most recently Apple have been granted permits to test their robo-cars.

These contenders are careful not to give away any crucial knowhow to their competitors. Waymo is locked in a legal spat with Uber, accusing the dial-a-ride upstart of infringing patents and stealing trade secrets. Tesla just dropped its lawsuit against self-driving car startup Aurora, which allegedly poached engineers and half-inched blueprints from Elon Musk's flash motor maker.

So given these levels of secrecy, it was a bit of a surprise this week when Baidu announced Apollo: a three-year project open up its self-driving technology. How generous, you may think. But if you look closer, you can see it's an attempt to dominate the car industry with a go-to driverless control system. Baidu hopes to level the playing field, helping Chinese automakers in particular compete with Audi, BMW, GM, and other big names toying with robo-vehicles.

The Apollo project will gradually release blueprints to its hardware and software code, which a focus on exploiting cloud services as much as possible. Baidu is a cloud giant – it's known as China's Google – so that's kinda expected. The shared code will tackle obstacle perception, trajectory planning, vehicle control and others systems, and include a set of testing tools, we're told.

The move is "particularly suitable for the Chinese automotive industry, where there are many large brands who don't have the ability to develop their own autonomous driving technology, which would mean that within five to ten years they would already be too far behind," a Baidu spokesperson told The Register on Wednesday.

Although its main focus is China, Baidu says it is open to collaborations with the rest of the world. Baidu just announced partnerships with Germany's Bosch to develop better mapping capabilities, and with Harman, a US-based company owned by Samsung that produces connected products for automakers and consumers, to build a virtual assistant inside cars.

"Auto manufacturers no longer need to tie themselves up in the development of autonomous driving technology, but can work with Baidu to gradually learn to conduct more sophisticated tasks. This also helps avoid industry duplication," the spokesperson added.

"Overlapping and repetitive efforts to invest in autonomous driving is not efficient or beneficial to the quick development of the industry."

Earlier, Baidu chief operating officer Qi Lu had said: "China is the world’s largest market for automotive sales and production. It has many car brands and an open environment that is ripe for collaboration. Baidu took the initiative to open our autonomous driving technology to the industry in order to encourage greater innovation and opportunities, making better use of our technology to drive the evolution of the entire industry.

"An open, innovative industry ecosystem initiated by Baidu will accelerate the development of autonomous driving in the US and other developed automotive markets."

Apollo's materials are expected to be released from July. Baidu hasn't said exactly how it will share the blueprints, nor under which license, other than that it will "open source code" and "gradually introduce fully autonomous driving capabilities on highways and open city roads over time by 2020."