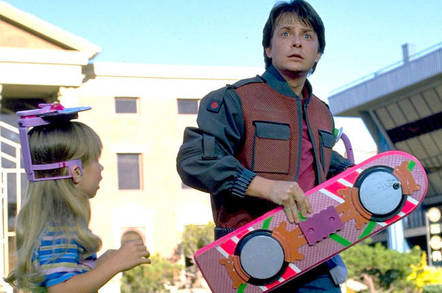 A dentist in Alaska has been accused of performing a tooth extraction while riding a hoverboard.

Dr Seth Lookhart, 31, was hit with the claim by US state officials this week in the Alaska District Court, Third Judicial District at Anchorage, along with more than a dozen charges related to his operation of a clinic in Anchorage.

According to state prosecutors, Lookhart, who arrived in Alaska and began practicing in 2014, filmed himself removing the tooth from the mouth of the sedated patient while atop the hoverboard gizmo – which is a cross between a poor man's Segway and a motorized skateboard – as a joke.

"Lookhart sent the video to several people and joked about the procedure representing a 'new standard of care'," the complaint alleges. "The patient in the video is a female patient that appeared to be completely sedated and unaware of the fact that Lookhart extracted her tooth while riding a hoverboard, and filmed it."

The stunt earned Lookhart one charge of performing unlawful dental acts, a class B misdemeanor under state law.

Lookhart was also accused of recording and sharing the video of another procedure (this time while seated, presumably) on a sedated patient without knowledge, and allowing assistants to issue painkiller prescriptions without proper consultation.

Those charges, however, are just a portion of the 17 counts Lookhart was hit with. The rap sheet facing the dentist includes eight counts of medical assistance fraud related to his overbilling the state's medical aid program millions of dollars on unnecessary procedures (such as sedation that wasn't called for).

He is also looking at three counts of unlawful dental acts, one count of performing dentistry without a license, two counts of scheme to defraud, and one count of theft in the first degree. ®