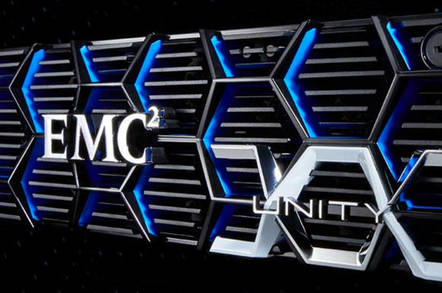 Branded UNITY – but for how long?

EMC will probably have to change the name of its Unity array, now that a court has found in favour of Nexsan's use of the trademark.

Both companies market storage arrays branded Unity. Nexsan reckoned it filed its Unity trademark first and sued EMC for misusing it. EMC renamed its mid-range VNX/VNXe arrays Unity when it upgraded them.

In the case, number 1:16-cv-10847-WGY, held in the Federal Court for the District of Massachusetts, Nexsan's complaint said: "EMC has threatened suit unless Nexsan abandons its UNITY trademarks." It "seeks a declaration that it has priority to, and is not infringing upon, certain trademark rights asserted by EMC Corporation."

After Nexsan filed suit against EMC, Dell acquired the business and inherited EMC's side of the case.

In a fact-finding document the court stated: "On March 7, 2016, Nexsan completed a trademark search for 'UNITY' which revealed that the mark was not yet used in relation to computer data technologies. Subsequently Nexsan filed its trademark application for the UNITY mark with the USPTO on March 22, 2016."

On May 5, 2014, the court document says EMC employee Chad Sakac's Virtual Geek blog referred to "unity" in the context of VNX/VNXe developments. This is not an official EMC blog. Subsequently EMC started confidential beta testing of what would be eventually branded the Unity array in December 2015. It was referred to by various names: Thunderbird, Oberon and UNITY. A UNITY mark did not appear on the hardware during the beta test.

EMC used both the Thunderbird and UNITY names in these presentations and attendees signed NDAs. So this usage was not public.

Later the document declares: "On March 7, 2016, Nexsan received a trademark report for the UNITY mark, which revealed no use of the UNITY mark in relation to computer data storage, let alone use by EMC."

Then "On April 29, 2016, EMC filed for trademark registration of its UNITY marks in connection with computer goods and services... On May 2, 2016, EMC publicly launched its UNITY products at the company's annual trade show."

EMC "asserts that its beta testing and pre-market presentations establish its priority to the UNITY mark. Nexsan counters that EMC's pre-sale activities were not extensive enough to grant EMC priority."

This Court concludes that EMC has not carried its burden to establish prior use, and thus Nexsan has priority to the UNITY mark based on its intent-to-use applications.

It held that EMC's beta testing did not legally demonstrate public prior use of the UNITY trademark, due to a small test population, multiple array name use and the testers having to sign NDAs. Neither did its pre-sales presentations as they were also covered by NDAs and reached only a small number of people.

The Sakac blog was personal and not official EMC material, which along with other reasons disqualified EMC from establishing prior public use of the Unity name.

Neither Nexsan nor EMC have said anything about what happens next. We imagine Nexsan now has grounds to sue Dell EMC for trademark infringement if it continues to use the Unity name, and envisage Dell EMC rebranding the array. It might even try to buy Nexsan off by paying cash to have it rebrand its Unity array. We've asked EMC what it will do and will let you know when we know. ®