IBM. Sigh. Revenues. Sigh. Down. Sigh. For the 20th quarter in a row 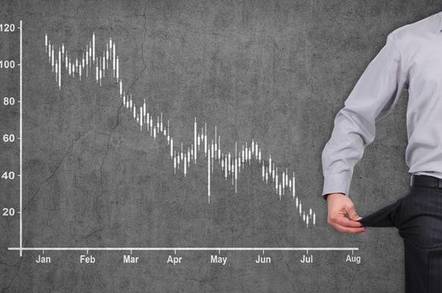 IBM says it is right on track for the coming fiscal year: everything is going to plan and its sales are falling just as expected. Hurrah for Big Blue!

For its first quarter of 2017, which ended on March 31, Indian Business Machines' "strategic imperatives" core of divisions were up 12 per cent, even as other areas of the corporation continue to wither. Here's the breakdown:

Strategic Imperatives – the security, cloud, analytics, mobile and social businesses that make up IBM's future plans – accounted for $7.8bn of Big Blue's sales on the quarter. Getting these units to take over the bulk of the revenue haul is vital if IBM wants to offset the losses in its systems division and other shrinking markets.

IBM execs noted the ongoing efforts to "shift resources" (read: cut jobs) away from the money-losing parts of its business and into the higher-growth parts, a strategy that has irked many of its employees.

"In the first quarter, both the IBM Cloud and our cognitive solutions again grew strongly, which fueled robust performance in our strategic imperatives," said chairman and CEO Ginni Rometty in a statement. "In addition, we are developing and bringing to market emerging technologies such as blockchain and quantum, revolutionizing how enterprises will tackle complex business problems in the years ahead."

Rometty, as usual, did not take a conference call with analysts after the quarter's financial data was released. That task was left to Patricia Murphy, veep of investor relations, and chief financial officer Martin Schroeter.

"So it has declining opportunity, but that’s high value. Some of those businesses, like the web application server, is growing, it's in a growing market and we grow.

"I just want to make sure everyone's clear, [the core] is made up of lot of different things. And included in that core, if you will, is – we've got part of our Power business, we got some of our mainframe business, we're just not in the time of the cycle for the core part – for those parts of the core to grow. We will get to that part of the cycle when it grows."

While IBM maintains it is right on course to meet its year-end earnings expectations, investors were less impressed with the first quarter returns. Following the release of the financial figures, shares were down more than five per cent in after-hours trading. ®

Let off the hook