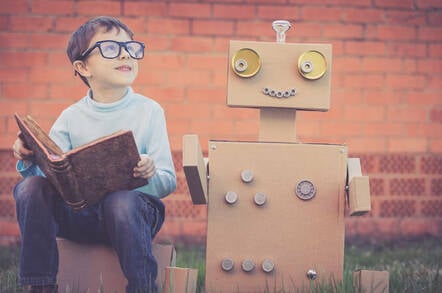 F8 2017 Facebook all but admitted the failure of chatbots last month – with the announcement that developers building Messenger bot can hide text input boxes and offer menu-driven conversations instead.

Chatbots were billed by some as the new user interface for apps: rather than tap on icons and swipe through screens, you tell the software what you want, and it reacts accordingly. Now, rather than nattering away with supposedly intelligent applications on Facebook Messenger, customers are given preset phrases, such as "what's on sale," to choose from so the app can respond. Less AI, more dialog from an old point-and-click adventure game like The Secret of Monkey Island.

These bots were supposed to be imbued with artificial intelligence, a term that here means speech-to-text, natural language processing, and maybe a bit of machine learning to evaluate user input and formulate a response.

But artificial intelligence of this sort has been oversold. It's capable of simple tasks – finding an email address in a typed sentence and even understanding the intent behind basic sentences – but today's bot platforms are nowhere near smart enough to converse in a meaningful way with people.

During a keynote today at Facebook's F8 conference in Silicon Valley, the social network's CTO Mike Schroepfer said that for all the promise of AI, bots still cannot answer most of the questions we ask.

So menus are back.

A chatbot that relies on touch input to select menu options has lost its reason for being. It's simply an app, one among billions that may or may not be well made. But, of course, Facebook doesn't offer chatbots. Its Messenger Platform is concerned with bots. No chat, just bots. Presumably because they can't do chat.

"We never called them chatbots," Messenger veep David Marcus insisted to journalists on Wednesday. "We called them bots. People took it too literally in the first three months that the future is going to be conversational."

Marcus doesn't consider Messenger bots to be apps either. Bots, he said, "are not going to replace apps. What we're doing is very different." Marcus subsequently delineated this non-distinction: Apps are software programs that don't work well in the context of Messenger. See? Night and day.

Let's call a spade a spade. Facebook is trying to cram apps into its mobile chat software. For developers, the benefit is access to people's Facebook data that is not typically available on the web – their identities, interests, and so on – without user interaction. On the rare occasions when these software design contortions work, then the price – dependence upon Facebook – may be worth it.

Facebook has made a habit of highlighting a handful of organizations that, it is claimed, have had positive results from bots, such Canada's Rogers, which, according to Marcus, reported a 60 per cent improvement in customer satisfaction following the deployment of a Messenger customer service bot. Marcus also mentioned that Sephora bought ads on Facebook's Newsfeed that directed people to Messenger, resulting in an 11 per cent increase in makeup booking sessions.

So Messenger bots – don't call them apps – are, by Marcus' estimation, more likely to be successful than mobile apps launched into the hopelessly over-saturated app market. That's a rather a low bar.

"If you look at apps and the app market right now," said Marcus, "if you're not launching something that's going to get daily use, it's not going to be successful. People will use it once and forget it. As an app developer, it's extremely hard to get distribution right now."

Facebook Messenger appears to be a reasonably promising channel for distribution. With over 1.2 billion monthly active users, Messenger has enough of an audience to matter to marketers. And it has more than 100,000 bots and just as many developers.

Where people go, companies will follow. But that doesn't mean business apps will work well in the Messenger conversation flow or even outfitted with menus and buttons. Interface issues and interaction models still need to be solved. ®

Facebook's own much-hyped AI-powered Siri-like M chat agent has been relegated to a curious lab experiment. If it can't understand what its conversation partner says, it falls back to a human handler to answer the question, which is rather naff. Facebook boss Mark Zuckerberg was, El Reg has heard, eager to roll out M to his billion-plus users, but was stopped by his righthand-woman and chief operating officer Sheryl Sandberg when execs realized they would have to hire thousands upon thousands of workers to handle all the failed chats – a cost the biz thought was too great to bear.