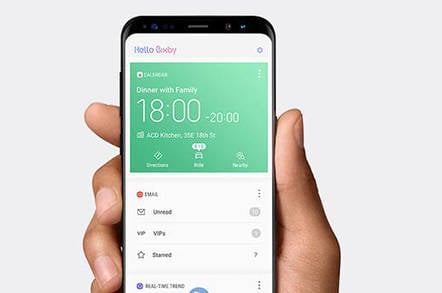 It's not entirely clear why Samsung hyped up its new digital assistant earlier this year.

Its answer to Apple's Siri, Microsoft's Cortana, Amazon's Alexa and Google's, um, Google Assistant was to be called Bixby. And it would, according to Samsung Mobile CTO and Bixby architect Injong Rhee, be an "interface revolution."

Well, the reviews are in and Bixby is more Shixby.

Samsung has a lot to do with the release of its Galaxy S8: the company was making significant headway against Apple's iPhone with its Galaxy range. It offered phone hardware that was in many respects better than Apple's and included features that have still yet to appear in the iPhone.

But then came the Galaxy Note 7 and its exploding batteries, which led to a massive recall. The S8 not only has to deal with the fact that people are waiting to compare it with Apple's new iPhone, expected this summer, but also get over the brand damage of the exploding batteries.

Presumably, the company thought that crowing about Bixby and how it would also connect with other Samsung devices – everything from TVs to fridges via VR glasses – would give it that edge.

About the voice thing...

But then it confirmed just one week before launch that the Bixby voice assistant would not actually come with the "voice" part. Instead, customers will have to wait until "later this spring" – a vague timeframe that in the tech world means anything from the end of May to January next year.

If the failure to actually include the most important element of Shixby in the phone wasn't bad enough, early reviewers are also unimpressed with what the digital assistant can do on the phone itself.

"Bixby is an intelligent user interface," said CTO Rhee last month, stressing that it would focus on the phone's functions rather than trying to act like a digital encyclopedia. But that intelligence appears to comprise little more than flashing up information derived from apps – like things trending on Twitter, things in your calendar and breaking news.

These things already exist in other (Apple and Google) phones. And there are countless apps that do the same, sometimes better. Samsung has dedicated an entire button on its phone to Bixby.

The desperate drive for a digital assistant so the company doesn't get left behind has even led to Samsung going against one of the features that people most like its phones for: keeping unnecessary clutter to a minimum.

In fact, some reviewers have reported that they are using Google's Assistant – which also comes on the S8 – in preference to Shixby, putting Samsung in the embarrassing Apple camp where people shove unwanted apps forced on them by Cupertino into an "Apple shit" folder.

So what do we have?

When it admitted voice wasn't coming at launch, Samsung tried to put a brave face on it by hyping up the stuff that Bixby would do: "Bixby will make your phone more helpful by assisting in completing tasks, telling you what you're looking at, learning your routine and remembering what you need to do," it said, flagging up Home, Reminder and Vision.

Home is a little menu that pops up when you hit the dedicated Bixby button on the side. It does the same as every other smartphone on the market – aggregating recent alerts from your apps.

To make it worse, the promise of customizing what pops up when you press the Bixby has been removed at the last minute, so you are stuck with whatever Samsung decides you need (how very Apple).

Reminder is exactly that and no more: a reminder app.

Leaving Vision. Which is pretty much the only thing that people like about Shixby. It helps you buy things (oh, thank god because we all have trouble finding things to buy). Basically it's RedLaser or Amazon Flow but built into the phone: press an icon while looking through the camera to scan a barcode.

But this is not something that people are going to use all the time, especially when there are apps like Amazon's main app, which lets you do the same.

Vision also does translation – point it at a sign and get a translated version – but apparently doesn't work as well as other existing apps.

Samsung swears that this will all get much, much better soon. The inclusion of voice will make it work much better, and it will shortly start integrating with other products (think smarthome tech and saying "turn off the lounge lights" into your phone). And the company intends to open it up to third parties – which might, if done well, help it become the smartphone version of Amazon's Alexa.

But that's all future possibilities. All we know for sure right now is that Samsung has significantly under-delivered. Shixby it is. ®