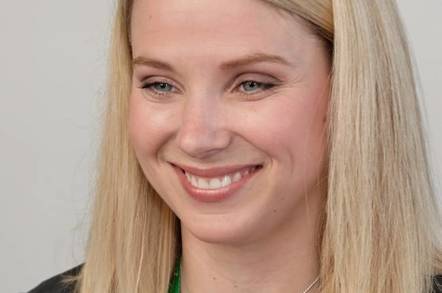 Yahoo! boss Marissa Mayer ... has nothing to do with this story

Yahoo! has been hit with a lawsuit alleging its web-hosting service has been shutting down customers' websites for months while still charging them.

The class-action complaint [PDF] was filed on Friday in the Northern California US District Court by a bloke called Ronald Meyer. He accused the Purple Palace's Small Business service of taking his website and email offline while still taking payment for the service.

Meyer – not to be confused with Yahoo! boss Marissa Mayer – says that in October of last year, the photography site he has run through Yahoo! Small Business since 1998 was taken down without any notice or warnings. What's more, he's still getting charged a monthly rate for hosting a site he claims has been inaccessible for nearly six months.

"Defendants' Terms of Service governs the relationship between Defendants and customers who pay for Web Hosting. The general relationship is straightforward; money in exchange for services," the complaint reads.

Meyer says that in addition to his hosted website, Yahoo! has also taken his mail service offline, something that, all things considered, might actually be more of a favor.

The complaint alleges four violations of the California Business and Professions Code as well as violations of US breach of contract, breach of good faith, and unjust enrichment.

Meyer (and his lawyers) are seeking a jury trial for damages against Yahoo!'s now-parent Aabaco on behalf of himself and any other Yahoo! Small Business customers in the US who have had their sites taken down while still being charged. ®