Zuckerberg: Escape from the real world into my goofy make-believe science-fiction fantasy 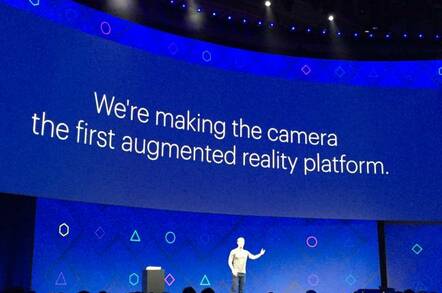 F8 2017 Amid the fallout over the killing of an elderly man broadcast via Facebook on Sunday, CEO Mark Zuckerberg declared, "Our next focus is building community."

Speaking at the F8 2017 developer conference, Zuckerberg acknowledged that his social advertising firm has a lot to do to prevent tragedies like the murder of Robert Godwin Sr in Cleveland, Ohio.

How that might work was not discussed, but Facebook's leader suggested that community bonds – a topic he wrote about in February – could be strengthened through cultural and artistic contributions, in part through AR.

"Augmented reality is going to help us mix the digital and physical in all new ways and that's going to make our physical reality better," Zuckerberg insisted.

Toward that end, Zuckerberg sees the smartphone camera as the gateway drug for AR.

The Facebook Camera Effects Platform presently consists of two tools, Frame Studio and AR Studio. It allows developers to place graphics over the imagery and video from smartphone cameras.

Frame Studio provides a way to create and superimpose graphical frames on Facebook camera images. It's similar to the static filters used in a variety of social apps to enhance photos.

But AR graphics are dynamic. They can adapt to underlying scene changes, as happens with Facebook Live video. For example, a developer could use AR Studio to create a halo that maintains its position over a person's head during a video recording session.

"This opens up a whole set of new possibilities for developers and makes Facebook Live broadcasts even more engaging by connecting creative effects to interactions between broadcasters and viewers," the company said in a blog post.

Zuckerberg addressed contrast between real-world tragedy and fake-world frivolity by attempting to frame eye candy tools as a way to encourage people to connect.

Unsaid, but more important for Facebook's business, is that such tools encourage people to work for free, creating content that Facebook can monetize through advertising. Facebook's dependence on free labor may have something to do with Zuckerberg's conviction that, in the future, "more of us will contribute to culture and society."

F8, which began in 2007, marks the fourth consecutive year of developer conferences held by the company, following a commitment in 2014 to rock the boat a bit less.

That was when Zuckerberg replaced Facebook's "move fast and break things" mantra with a commitment to stable infrastructure, because developers don't enjoy rewriting their apps every few months to accommodate platform changes.

The biz's decision to behave more predictably followed a two-year hiatus in 2012 and 2013 when Zuck's braintrust rethought its commitment to web-based gaming companies – specifically Zynga – and shifted its focus toward mobile applications.

Beyond its AR push, Facebook provided developers with a handful of other more or less welcome announcements.

On Wednesday, Zuckerberg promised an update on "direct brain interfaces that will eventually one day let you communicate using only your mind." ®