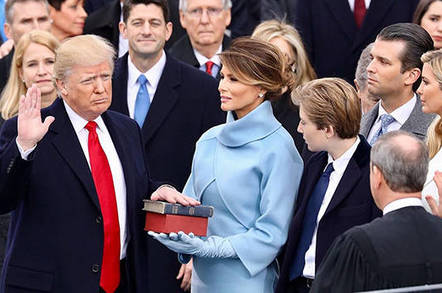 Applications for H-1B visas, the most common route for skilled technologists seeking lawful work in America, have decreased for the first time in years.

The US Citizenship and Immigration Services (USCIS), which is responsible for allocating the visas, announced yesterday that it only received 199,000 H-1B petitions during the application period; well below the 236,000 it received for FY 2016, and the 233,000 for FY 2015.

The drop in application numbers comes amid much noise from President Trump against immigration and in favour of protectionist employment policies. He particularly criticised the H-1B visas for allowing those with a bachelor's or higher degree in a specialty field to work in the US for up to six years.

This resulted in pushback from Silicon Valley, where the visas are widely used as a way of bringing in people from outside the US, notably Indian technology consultants.

Politically, however, there is much criticism of the way in which H-1B visas function. As they set a floor wage of $60,000pa, the visa is regularly accused of setting the norm for both immigrant and native technology workers in terms of expected salaries.

Earlier this year, a leaked draft executive order seen by Bloomberg News revealed that the President wanted to change the H-1B visa programme to prioritise "the protection of American workers – our forgotten working people".

"Businesses would have to try to hire Americans first and if they recruit foreign workers, priority would be given to the most highly paid," Bloomberg noted.

No such order has, as of yet, been forthcoming, but is widely reported to be on the way. According to The New York Times, the President is planning on signing such an order today. Reportedly, administration officials speaking on the condition of anonymity to a number of reporters said the executive order will fall short of ending the H-1B programme, but would "radically change it". ®