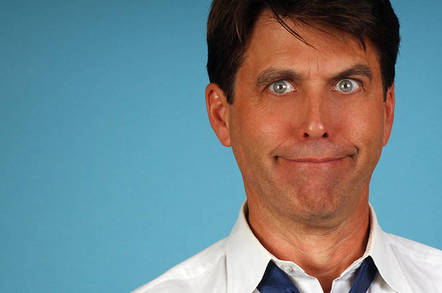 The Electronic Frontier Foundation is countersuing a patent troll that wants its name removed from a "stupid patent of the month" blog post.

GEMSA appeared on the EFF's radar last year when it sued Ericsson and Amazon for allegedly infringing a 1999-era patent: specifically, US patent 6,690,400, which describes a user interface that organizes files and operating systems into "virtual cabinets."

The outfit has so far sued no fewer than 37 other companies, including big-name tech companies Airbnb, Uber, Netflix, Spotify, and eBay. In each case, GEMSA accused the company's website design of somehow trampling on the GUI patent without permission.

The EFF was not impressed, and it branded the 17-year-old design its "Stupid Patent of the Month" in June. The digital-rights organization went on to argue that "complaints with such sparse, and implausible, infringement allegations should be thrown out immediately for failure to state a claim," and notes that GEMSA has filed in the Eastern District of Texas – every patent troll's favorite jurisdiction.

It's safe to say that the EFF's post had a big impact on GEMSA efforts to extract cash from wealthy corporations it claimed were infringing its intellectual property, because GEMSA took the American non-profit to court in its home country of Australia, alleging defamation.

It asked for an injunction prohibiting the EFF from publishing anything about GEMSA and its treasure trove of patents, and asked for its "Stupid Patent of the Month" post to be taken down. Remarkably, an Australian judge agreed [PDF].

However, the EFF simply refused to remove its article, prompting GEMSA's lawyers to send a snotagram [PDF] in January insisting the foundation delete the blog post and cough up roughly $750,000. The legal threat also instructed the EFF to, basically, rewrite other parts of the web:

We further demand that you make immediate arrangements for any links to the article to be removed from the world wide web including any and all other websites which references the infringing material. If you do not do this, we will be forced to do so at your expense.

At this point, the EFF clearly decided enough was enough – and today it kicked off its own lawsuit [PDF] – in California – asking a US district court to rule that the Australian injunction was unenforceable.

"This order, which purports to silence expression of an opinion, would never survive scrutiny under the First Amendment in the United States," the EFF noted on Friday, referring to the 2010 Securing the Protection of our Enduring and Established Constitutional Heritage Act (SPEECH Act), which states foreign orders are not enforceable in the United States unless consistent with free speech protections.

EFF argues, with some justification, that calling a patent "stupid" fits rather firmly within the First Amendment. "We are going to court to ensure that EFF is not silenced by foreign laws that forbid speech our Constitution protects," EFF general counsel Kurt Opsahl said. "GEMSA may not like what we've said about its patent, but we will defend our right to express our constitutionally protected opinion."

And that, in a nutshell, is the problem with trying to use an outdated patent to sue organizations based in California, through a court in Texas, when you are based in Australia.

What Global Equity Management may also have unwittingly done is put a big red flag on itself that reads "patent troll." With the US court system finally coming around to the reality of the damage caused by runaway patent litigation, that is not a good sign to have hanging over your head. ®