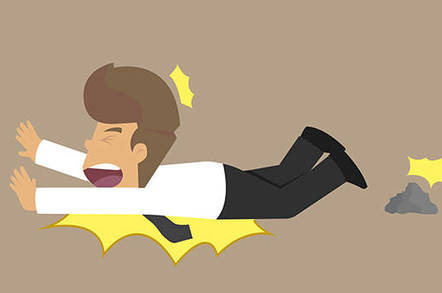 Analysis When he's not ignoring national laws and threatening employees, the president of the European Patent Office (EPO), Benoit Battistelli, is on a crusade to make things work faster.

Against an ever-more unhappy background of EPO staff and patent examiners, Battistelli has for several years put forward the same defence: he is making things run more efficiently.

Last month, as some countries called for his ousting, Battistelli presented figures and later gave a press conference focused on one thing: the EPO has granted more patents faster than ever before. And it has done so, he claims, with rising quality.

"The first of these is a key result," he wrote in a subsequent blog post. "The number of patents granted has risen by 40 per cent, with the total reaching 96,000. It indicated that we're processing more patents, more efficiently and with the minimum of delay. This achievement is not because there has been a significant rise in the granting rate. It is the result of the consistent application of a quality and efficiency policy and the reforms that we have made."

A very similar philosophical thread was pushed by Battistelli last year as well. That time it was a pre-occupation with "early certainty" – which means an early indication to someone applying for a patent whether they are likely to have it approved or not.

Battistelli pushed the exact same points: greater speed while retaining quality. This is his overarching vision and the justification behind his campaign of intimidation against staff, as well as his rewriting of the rules of every part of the EPO that has resisted - even for a second - his reform ideas.

"Over the years the EPO has built its reputation upon quality, providing our users with legally robust intellectual property protection. But, as with any good service, good products need to be delivered on time," he argued.

"This is particularly so for our users, as innovators and investors look for certainty at an early stage in the process. Patent strategies can depend upon accurate predictions as to the strength of their applications, and what objections they might need to overcome. Timeliness is therefore a key issue not just for applicants, but also those potentially affected by pending patent rights."

And all of that sounds great. Except, now that the enforced changes have started taking effect, the reality of Battistelli's paper-plan has started hitting home.

In a series of three blog posts earlier this month, German patent attorney Thorsten Bausch has taken issue with the idea that faster is always better.

While he praises the idea of patents being reviewed and approved faster, Bausch notes that in many cases companies do not want patent reviews coming back at them swiftly and give a number of different examples of where Battistelli's drive is causing real problems.

For one, the drive to be faster means that timeframes are compressed. What are often complex decisions can benefit from being played out over a longer period. The result is that the stakes are higher for patent applicants and the workload is greater.

Whereas before a patent would be carefully examined, with prior examples and possible conflicting patents pulled in, and then third parties introduced and slowly filtered out, Bausch says he is seeing critical meetings happening much earlier on.

Those meetings can see a patent go down a path to being refused much faster and in a more complex environment – with lots of claims and counterclaims. Worse, he notes, the effort to speed things along, particularly thanks to Battistelli's "early certainty" doctrine, is resulting in rushed initial reports on which those critical meetings are built.

"It is my impression that the pressure exerted by the 'Early Certainty' program on the work output of examiners has considerably increased," he writes.

"Perhaps unsurprisingly, several colleagues of mine have started to observe that the quality of the reasoning and the depth of analysis of official communications at least in some technical areas has been declining to a noticeable degree. This is exactly what should not happen. Superficial examination, whatever its outcome may be, helps no one."

Another knock-on impact of the rush to early decisions is that patent examiners who are expert in a specific field are being flooded with requests early on in the process. "Some of my colleagues have received the same number of summons by examining divisions in the last half year that they had received in the previous ten years," Bausch notes.

These summons are to oral hearings, requiring a lot of effort on everyone's parts because they require people to think of all the possible questions they may be asked, rather than a written process where they can methodically work through each issue.

The use of expert testimony so early on the patent process is also, Bausch notes, a highly inefficient way of using the EPO's resources. What's more, applicants don't like it – they have to do a lot of extra work in a high-pressure and fast-moving environment and argue against experts before they have a full understanding of all the complexities of the case.

"I am afraid that the 'early certainty' program… will – needlessly – have quite significant negative consequences for most applicants," Bausch warns. "In my view, there is no need to introduce such an 'early certainty' program in examination proceedings at all, provided that the EPO continues its previous practice to accelerate examination proceedings when so requested by the applicant or a third party."

Aside from the unintended consequences of speeding everything up, the EPO also faces a significant problem – as Battistelli has repeatedly noted – in terms of quality.