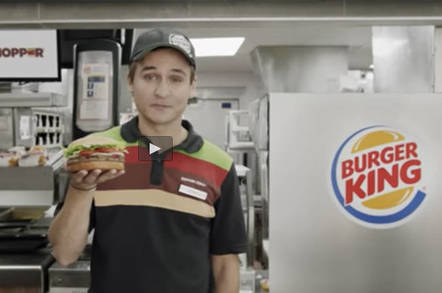 Fast food chain Burger King is doubling down on an ad campaign designed to activate the Google Home appliance, even as Google and the public at large object.

The 15‑second ad features an actor who says, "OK Google, what is the Whopper burger?" in an attempt to force the Google Home devices of viewers to navigate to the cholesterol bomb's Wikipedia page.

Originally posted on YouTube, the ad was aired Wednesday night on The Tonight Show and later on Jimmy Kimmel Live. While Android handsets are trained to home in on the user's particular voice and would not respond to the ad, Google Home devices react to a number of voices and were prone to being activated by the ad when it ran on television.

While Google was said to have attempted to block Home units from being activated by the video, the spot did reportedly work on some devices, causing them to pull up the Whopper's Wikipedia page.

In response, users edited the Wikipedia page and included unflattering comments, causing Google Home devices to proclaim the burger was made with "100 per cent rat and toenail clippings" when prompted by the video. The page has since been fixed to reflect the correct composition of the Whopper, including its 37 grams of fat and 12 grams of sugar.

The controversy was likely exactly what Burger King had hoped for when it produced the ad. The fast food chain no doubt was well aware that by hijacking the Google Home devices it would upset the public, but also raise awareness about the burger Wikipedia once said was made from "medium-sized child."

According to the Washington Post, Burger King got what it was after, as "social conversation" on the company was up 300 per cent. ®