BOFH: Defenestration, a solution to Solutions To Problems We Don't Have 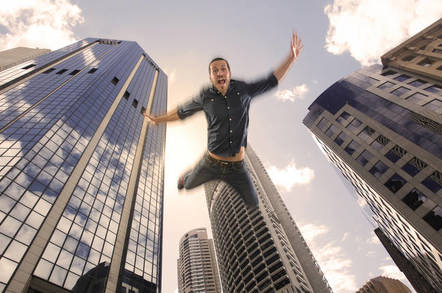 Episode 5 "The thing is," I explain to James, "the vast majority of management bright ideas aren't – they're just stuff which keeps the Boss occupied till lunchtime firing off urgent emails about problems we don't have."

"Then after lunch he'll send maybe three or four more emails," the PFY adds, "at least two of which will want updates on some project that you'd already updated him about before lunch – though he won't remember this because he was busy thinking about gravy."

"It's alright!" I interrupt. "You're young and have no idea of what happens in the real IT world – so we thought we'd give you some pointers from our vast experience."

"I'm never seeing that code am I?" James sighs.

"You'll see the code when we know you have the IT work-sense to fully appreciate it!"

"When we have finished the downloading of the pearls of wisdom," the PFY says.

"The first of which is there is no such thing as a budget," I say.

"Of course there is!" James protests.

"There's not. Sure, they mention figures, but when you come to get money to expand the backup RAID array the cupboard is bare. THEN, when several people lose files which are unrecoverable because the RAID array was too small, there's TONS of money."

"Yes, but successful budgeting gives the company confidence to..."

"... spend more money on high-end executive laptops with luxurious leather satchels, yes. So they give you 50k for, say, for new servers. If you spend 40k then the beancounters will tell you that you must only need 40k next year. If you spend the 50k you budgeted they'll take 5k off next year's budget for cost cutting and if you spend 60k they'll take 10k of next year's 50k to make up the shortfall."

"So what do you do? Estimate higher?"

"OK," the PFY says. "Management ideas. Your average middle manager is going to have maybe two good ideas in his working lifetime, one of which will be having a dump before going to a long meeting. More often than not his only ACTUAL good idea happened years ago and he's still living on the glory of buying second-hand POTS phones at auction and making a killing on falsified depreciation. He'll continue to bring it up for the rest of his life – even when people don't know what POTS phones are."

"Yes, but what has this got to do with the security code?"

"The rest of the time his ideas are like a turd in a desk drawer. The nearer you get to it the more it smells – until you see it in all its glory. Then... the horror."

"Yeah, but the security system..."

"Management Ideas – Part 2. Whenever a middle manager comes to you and says 'I've been thinking' or 'You know what would be a good idea?' you can be 98 per cent certain they have not been thinking and that it's a crap idea. BUT YOU NEVER SAY NO."

"Sorry? I thought you said it was a bad idea."

"And you immediately erase it from your brain," the PFY says.

"Not if you're a seven-pinter."

"Seven pints," the PFY says. "The amount of strong lager it takes to erase things from your brain."

"And incidentally," I add, "the same amount of strong lager it takes to make a turd in the Boss's drawer sound like a great idea."

"Another thing you can do to head off a 'good idea' is to invent a crisis to divert the Boss's attention."

"Yeah, a fire, a server crash, pushing him out the window..."

"Yeah, it's only two floors, and odds are there's some scaffolding pipe laying on the footpath to break his fall."

"B-b-but that security change IS a good idea."

"No it's not," I say. "It's the most common management idea ever – a solution to a problem we don't have."

"And the most common STPWDHs are: performance/uptime/service delivery monitoring – because the users do that for us, remote access to services from some oddball home device – because it'll last two years and be obsolete, or – as in this case – an enhancement which no one will ever use."

"But you don't even know what the security enhancement is," James counters.

"You mean the one to use the access records to verify the hours people are in the building?"

"As a 'fire safety initiative designed to ensure everyone is out of the building in the event of a fire'?"

"And not to provide evidence that the PFY and myself often take 2.5-hour, seven-pint lunches prior to one of us letting ourselves into the Boss's office while he's at a meeting?"

"It doesn't matter. The Boss came in with that particular 'You know I've been thinking' idea several weeks ago, then he got you after we spent several more weeks 'thinking about it' over lunch..."

"So I'm never seeing the code then?"

"But TECHNICALLY it's not a bad idea."

"True, but it does fall into the category of 'enhancement that no one will use'."

"The Boss would use it."

"Not after he falls out of a window later today he won't..."