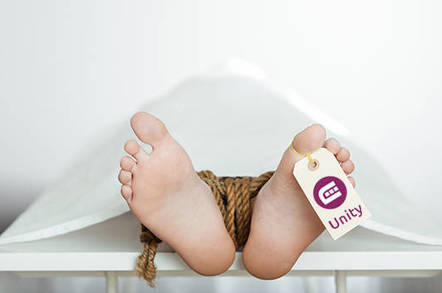 Ubuntu's dream of a single Linux platform across all your devices has died, swiftly, following a single gunshot to the head. Holding the revolver: founder of Ubuntu, Mark Shuttleworth.

Shuttleworth has shocked and surprised the open source community, even those who were critics of the Unity effort that was started six years ago.

"I'm writing to let you know that we will end our investment in Unity8, the phone and convergence shell," he wrote on the official Ubuntu blog Wednesday. "We will shift our default Ubuntu desktop back to GNOME for Ubuntu 18.04 LTS."

The decision came during a new-fiscal-year evaluation of Ubuntu's various projects. Unity – in its eighth version but without ever having made it to public release – didn't make the cut.

Developers are in shock – so much so that the Ubuntu blog has been knocked offline by traffic as we write (cache of post) – although Reg readers will have suspected something was coming. In an interview with us in February, Shuttleworth admitted that time was running short for the project, which he noted was already a year late.

Calling it his "white whale," Shuttleworth noted both the project's failings and his personal investment in the project. "I feel the team has earned a fair shot and I may take my carrots," he said – meaning that he would have do something he didn't want to because it was the healthy choice.

Sadly, it won't be on any phones, fondleslabs, goggles or desktops: Canonical is killing development of Ubuntu software for phones and tablets altogether – including, presumably, its Mir display server and thus paving the way for a Wayland-powered GNOME experience. The irony of course is that earlier this month, the new Samsung Galaxy S8 phone came with the ability to attach it to a screen and keyboard and use it as a desktop computer – Unity's dream.

"I took the view that, if convergence was the future and we could deliver it as free software, that would be widely appreciated both in the free software community and in the technology industry, where there is substantial frustration with the existing, closed alternatives available to manufacturers," Shuttleworth wrote in his post Wednesday. "I was wrong on both counts."

Despite noting that the Unity team had delivered a "beautiful, usable and solid" platform, he said he had to recognize the bigger reality. "I respect that markets, and community, ultimately decide which products grow and which disappear," he noted.

And if there was any doubt that the decision came as a blow to his dream of one Linux to bind them all, Shuttleworth wrote: "This has been, personally, a very difficult decision, because of the force of my conviction in the convergence future, and my personal engagement with the people and the product, both of which are amazing. We feel like a family, but this choice is shaped by commercial constraints, and those two are hard to reconcile."