Meanwhile, for non-Americans, things could get a lot worse 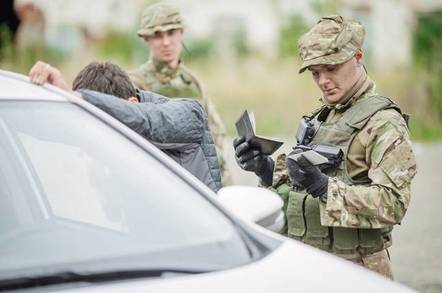 The Protecting Data at the Border Act would not only require a warrant from a judge to rummage through citizens' devices, but would also institute a four-hour time limit for detaining Americans at the border.

This would raise the bar for carrying out searches beyond a simple hunch or suspicion of anyone who looks vaguely Middle Eastern: under the proposed law, border officers must show probable cause, meaning they must convince a judge the search is reasonable and that evidence of wrongdoing is likely to be found.

Right now, anyone – citizen or not – entering the Land of the FreeTM can be subject to warrantless probing of their electronics, which can be seized for further study in the lab for months if necessary. It's just that citizens can't be prevented from entering their home country: you can have your equipment taken and scanned, you can be questioned for hours, but you're still ultimately allowed in. Foreigners, on the other hand, have no such protections: they can be searched, grilled, and sent back the way they came, if immigration officials deem you to be a problem.

The draft legislation – which is still in its early stages – is essentially designed to make it a lot tougher to stop and search citizens on the spot when they return to the US of A. However, the bill is weighed down with one major caveat. If officers have serious concerns about a traveller but have no time to get a warrant, they can seize the electronics and later apply for a warrant retroactively. If the warrant application fails, all the information harvested must be destroyed and may not be used in further prosecutions.

We suspect this exception, which is available for pressing national security purposes, was written in to ensure the bill has bipartisan support. We have no idea whether or not border officials will trigger this caveat on a regular basis, if this law is passed.

The act has big-name backing: it is sponsored in the senate by Ron Wyden (D-OR) and Rand Paul (R-KY), with support in the House of Representatives from Jared Polis (D-CO) and Blake Farenthold (R-TX).

"By requiring a warrant to search Americans' devices and prohibiting unreasonable delay, this bill makes sure that border agents are focused on criminals and terrorists instead of wasting their time thumbing through innocent Americans' personal photos and other data."

While border patrol has carte blanche within 100 miles of America's boundaries, a 2014 Supreme Court ruling took away warrantless searches from police officers.

"As the Supreme Court unanimously recognized in 2014, innovation does not render the Fourth Amendment obsolete," said Senator Paul.

"It still stands today as a shield between the American people and a government all too eager to invade their digital lives. Americans should not be asked to surrender their rights or privacy at the border, and our bill will put an end to the government's intrusive practices."

"The government should not have the right to access your personal electronic devices without probable cause," Representative Polis said.

"Whether you are at home, walking down the street, or at the border, we must make it perfectly clear that our Fourth Amendment protections extend regardless of location. This bill is overdue, and I am glad we can come together in a bicameral, bipartisan manner to ensure that Customs and Border Patrol agents don't continue to violate essential privacy safeguards."

As for the rest of you, life could get a lot worse

On the same day that the new legislation was introduced, the Wall Street Journal reports that the Trump administration is planning even more "extreme vetting" of foreigners coming to the US than first thought.

Multiple government sources whispered that the White House wants to give immigration agents the right to demand not only devices, but also social media account and online banking passwords, plus access to photographs and emails of anyone coming into the US. That could include folks from Uncle Sam's old allies – such as France and Germany – that have existing visa-waiver arrangements for tourists.

Officials are also considering questioning those seeking to enter the US about their personal beliefs. A Department of Homeland Security bigwig said questions could include how they view the treatment of women in society, whether they value the "sanctity of human life," and who they view as a legitimate target in a military operation.

The proposed rule changes could wreak havoc with travelers to America. For UK and other visa-waiver travelers, all it takes to get clearance to come to the US is filling out an online ESTA application before flying. If users also have to hand over their social media and email passwords then they may pick somewhere else for their holidays.

Business travelers too might well be dissuaded – potentially giving a boost to the videoconferencing business, or commerce in rival nations. But there would also, most likely, be a knock-on effect for US travelers, as has been shown before: other countries will start demanding personal and sensitive info from visiting Americans.

In 2004, the US government introduced a new rule requiring Brazilian visitors to be fingerprinted and photographed when entering America. In retaliation the Brazilians introduced the same rule for Americans entering their country, and the results weren't good.

Long lines ensued at Brazilian airports and a frustrated American Airlines pilot, Dale Robin Hersh, was fined $12,750 after he made an obscene gesture when being photographed entering the South American country. He paid up and charges were dropped.

If other countries start insisting that US citizens open up their email and social media accounts, there will be a load of angry Americans, on top of a lot of angry people trying to visit America, creating a nightmare for tourism industries. This is aside from the fact that it will give foreign governments, as well as Uncle Sam, the go-ahead to vacuum up globetrotters' personal info in the name of border security. ®