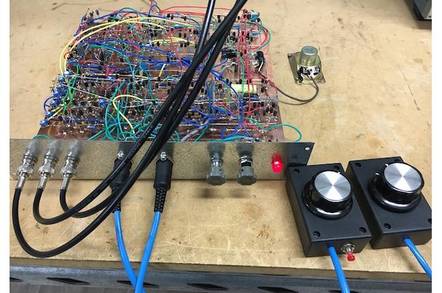 Warning: there's no real IT angle in a chap hacking a venerable Tektronix Type 422 oscilloscope to play Pong. It's just fun.

The Frankensteinian machine is the brainchild of Glen Kleinschmidt over at the electronic hobbyist site EEVBlog.

There's no “take the easy way” about Kleinschmidt's work: sure, it might be easy to digitally-synthesise the waves needed to display and move the paddles and ball on a CRT, but his work is made entirely out of discrete components:

“With the exception of a 2N2219A/2N2905A and a 2N3055/MJ2955 complementary BJT pair, the former for driving the speaker for the sound effects and the latter in the power supply circuit, the remaining bipolar junction transistors are either BC550C or BC560C. There are a bunch of 2N5484 JFETs for analogue signal switching, lots of 1N4148s and a few Zener diodes”, he writes (PDF).

That document also provides the circuit diagrams – around 20 of them, all hand-drawn, with the game needing more than 200 transistors. It's a reminder of just how much is involved in something as simple as sending Pong to the X-Y-Z of an analogue oscilloscope.

So the game can't last forever, Kleinschmidt makes the ball accelerate over time, and that makes the “Ball Horizontal Movement” circuit a Byzantine masterpiece.

The video below shows him playing against the game in single player mode. ®