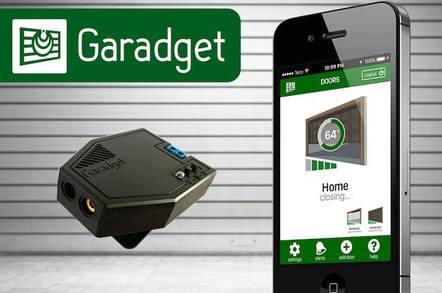 An Internet of Things maker has just had first-hand experience of the Streisand effect – after remotely killing a customer's Wi-Fi garage door for being rude.

Garadget builds and sells a so-called smart door opener that can be operated remotely from a smartphone app. Once installed, Garadget's $99 gizmo wirelessly connects to backend servers on the internet. This allows you to remotely control your door, or check if it's open or closed, from anywhere in the world: your phone app talks to Garadget's servers, and these talk to the smart door controller.

As one Garadget owner Robert Martin found on Saturday night, the gadget can therefore be killed at any time by Garadget staff: they just simply have to block access to a particular gizmo, cutting off the hardware from its app – and leaving the garage door stuck in place.

Martin found this out the hard way after complaining about the product online. First, he griped about the device in a negative Amazon review, and then started a thread on Garadget's support forums when the thing wouldn't work with his iPhone: the handheld's app was unable to control his garage door.

"Just installed and attempting to register a door when the app started doing this. Have uninstalled and reinstalled iPhone app, powered phone off and on ... wondering what kind of piece of shit I just purchased here," he wrote.

The response was not what you would expect. Martin was summarily banned from the forum until December 27, 2019 for abusive language, and he was told his comments and the poor Amazon review had convinced Garadget staff to disconnect his device from its servers, blocking his ability to control it.

"I'm happy to provide the technical support to the customers on my Saturday night but I'm not going to tolerate any tantrums," a rep responded. "At this time your only option is return Garadget to Amazon for refund. Your unit ID 2f0036 ... will be denied server connection."

Someone suggested this action was tantamount to unlawfully remote "bricking" a purchased device. "Technically there is no bricking, though," the rep replied. "No changes are made to the hardware or the firmware of the device, just denied use of company servers."

Unsurprisingly, this caused a certain amount of disquiet among customers and those watching the snafu unfold. Having a device manufacturer cut off its paying customers for attitude problems is certainly bad for business.

The Reg asked Garadget's founder Denis Grisak about the situation and he acknowledged that the decision had been a "bad PR move." Martin has now had his server connection restored, and the IoT upstart has posted a public statement on the matter.

"The language wasn't too bad for some venues, but Garadget enjoyed a very civilized community so that was a departure from baseline," Grisak said.

"It wasn't the review either – the negativity happens (deserved or not) and Amazon makes sure the vocabulary is clean there. The customer was in the very first stage of setting up his account and was already hating it. It didn't look like salvageable relation. As now learned, cutting the losses there didn't really end the losses."

The biz has also sought to placate users on the community boards with a message making it clear that this was a one-off and won't happen again.

"The firing of the customer was never about the Amazon review, just wanted to distance from the toxic individual ASAP," a rep said in a forum posting. "Admittedly not a slickest PR move on my part. Note taken. PS: Anybody has Streisand's phone number?"

The latter comment refers to the Streisand Effect, a phenomenon of the internet age where an attempt to shut down information actually leads to it becoming widely popularized. It is named after the talented singer – and somewhat less talented actress – who tried to have aerial photographs of her home removed, but had them widely disseminated instead after filing suit.

On one level, this was just about a user getting on the bad side of a small manufacturer that was spending the weekend trying to sort out a technical issue. On another level, this is a lesson in relying on remote systems for important stuff like securing your garage door. Ultimately, it spells out a warning for other companies – that one bad-tempered action can impact the entire business. ®