Microsoft's in-store Android looks desperate but can Google stop it? 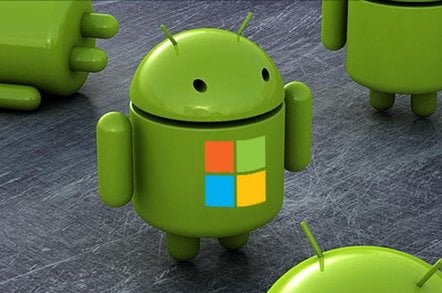 Analysis To survive in an increasingly mobile-first world, Microsoft needs the kind of regulatory intervention it fought so hard to avoid in the 1990s and 2000s. Only this time, imposed on the dominant mobile OS, Google's Android.

Microsoft imposed an iron look and feel on Windows, preventing PC builders from customising and branding the user experience. Their contracts with Microsoft had strict conditions over what desktop icons were visible at first boot, and icons leading to an alternative OS were strictly verboten.

In 1999 Judge Jackson's Findings of Fact concluded that: "Microsoft threatened to terminate the Windows license of any OEM that removed Microsoft's chosen icons and program entries from the Windows desktop or the 'Start' menu. It threatened similar punishment for OEMs who added programs that promoted third-party software to the Windows 'boot' sequence. These inhibitions soured Microsoft's relations with OEMs and stymied innovation that might have made Windows PC systems more satisfying to users."

Microsoft maintained that the restrictions were there to avoid confusing the user with different shells and lowered support costs. That's not what Hewlett Packard found, with one executive concluding it "resulted in significant and costly problems for the HP-Pavilion line of retail PC's" [sic] and an increase in support calls.

Wind forward 16 years and today Google, which dominates mobile with a marketshare of over 80 per cent, imposes conditions on phone makers that are just as rigid. A phone is useless without Google's proprietary mobile services (GMS), lacking even a location service. But to get (and then keep) GMS, the phone maker must promote Google's search bar and its apps, in exactly the way Google stipulates. The European Commission has objected to this, arguing that it harms competition and European tech companies.

Last week's intriguing reports that Microsoft will begin selling a "Windows Experience" Android phone – Samsung's Galaxy S8 – by flashing the device in the store, illustrates just how tightly Google controls Android, and how many hoops need to be jumped through. If Microsoft's retail initiative goes ahead, it's sure to attract the attention of regulators and, no doubt, Google's own legal department.

Mary Jo Foley reports that customised Galaxy S8 and S8+ phones with Microsoft apps to the fore will go on sale on 21 April in the US.

How is Microsoft doing this? One Reddit poster purporting to be a Microsoft staffer claims that a custom ROM is flashed on to the device in store, which would be a labour intensive and time consuming way of bypassing Google's rigid OEM directives on how phones should look and feel.

Desperation tactics? Well, perhaps you would be desperate too.

Microsoft has muffed its mobile efforts for a decade, with Windows Phone 7 (2009) plagued by slow progress as Android made huge gains. Redmond's most recent strategy of Universal apps and Continuum hasn't gained a lot of traction. It's all well and good having best-in-class mobile office apps, a good voice assistant, good search, and even a half-decent launcher, but it means nothing if nobody can see them. Google now quite explicitly steers users to a "Create" folder containing Google's rival apps.

Microsoft's hopes that Android would fork and an intermediate layer in the stack would open up, in the shape of Cyanogen, were dashed. They were never realistic, as we noted: "The logic behind investing in Cyanogen was a confidence that the firmware engineers could out-engineer Google and create a superior, richer code base that the world's ODMs would then flock to. But the flaw was the supposition that Google would cheer on this rival, in some noble Corinthian spirit of sport. The investment assumed Google would continue to release its best work as open source – to encourage fair play – and not migrate critical open code into its own proprietary binaries, which is how it actually responded. The VCs also assumed Google wouldn't attempt to copy CyanogenMod's best features and make them part of Android. And that Google wouldn't try to leverage its market power and contracts to steer OEMs into the one true Android, which was Google's. All would be fair play, and may the best Android win!"

That was never going to happen, was it? So a "Microsoft Experience" Android is the best Redmond can do – but that now requires cumbersome in-store technical measures to happen at all.

But is it legal? Microsoft evidently thinks that Google's Maginot Line can be circumvented. That the OEM has fulfilled its contract to Google and shipped a phone that passes the GMS compatibility tests. And that Google can do nothing to prevent a retailer customising the experience on the customer's request. That latter part seems crucial: it's the OEM's device after all.

This complex and risky venture demonstrates the lengths Microsoft now needs to go to since it lost the platform wars.

Under CEO Satya Nadella, Microsoft has run down the mobile division it acquired from Nokia in 2014 with 32,000 of the industry's most talented employees. The last Microsoft-branded phone appeared over a year ago. Today Microsoft only sells two Windows phones on its UK store, the Elite x3 from HP and a mid/low-end Acer model, the Liquid Jade Primo.

Its own platform is still around: but notably in Windows 10 briefings for journalists this week, the Creators Update mobile edition due wasn't mentioned – nor was Continuum. ®